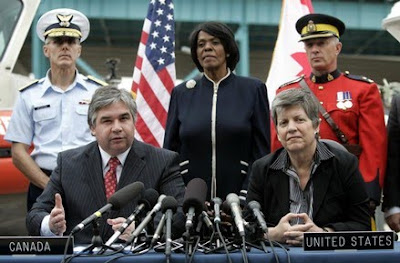 Under the pretext of the war on terror and through initiatives such as the Security and Prosperity Partnership (SPP), as well as other commitments, there has been an ongoing effort to further harmonize North American security priorities. The militarization of the continent, along with U.S.-Canada integration is taking place in areas of law enforcement, border services and the armed forces. More is being done to better protect the northern border, but somehow government needs to strike a balance between security and the movement of goods and people.

On May 27, 2009, Secretary of Homeland Security Janet Napolitano and Minister of Public Safety Peter Van Loan issued a Joint Statement on the Canada-U.S. Border. It went on to say, “We are committed to a collaborative approach to our border, one that enhances our security and public safety while facilitating the trade and travel that connect our two countries.” They agreed to hold twice yearly summits to further manage border issues. The Shiprider Agreement was also signed which allows the RCMP and the U.S. Coast Guard to conduct joint armed patrols of shared waterways. The scope of the agreement is broad and might push the definition of boundary waters. Any integrated cross-border maritime law enforcement operation could include land pursuits and aerial support. This could involve the cooperation of provincial and state police, the Canadian military, immigration and border patrol, along with other agencies.


Back in March of 2008, Stuart Trew of the Council of Canadians reported, Joint RCMP-Homeland Security “Shiprider” pilot project to be made permanent. He questioned and rightfully so, “Where were the public hearings on the Shiprider project? Where was the parliamentary debate or political oversight on this and on the security integration measures in the SPP in general?” At the time, no public announcement was made about the pilot project because authorities apparently wanted to keep an element of surprise as to their new border strategy. Later, officials were forced to reveal some of the project's details when U.S. officers were spotted in Canadian waters. The rationale being offered by some to counter any perceived loss of sovereignty is that the joint program will allow Canadian authorities aboard American vessels going into American waters and the reverse coming into Canadian waters. Although it is important to work together on shared security concerns, this agreement could set a dangerous precedent and be further expanded.

The final phase of the Western Hemisphere Travel Initiative came into effect on June 1 of this year. It requires Canadians and Americans to have a passport or other secured documents to cross the border by land. U.S. officials remain concerned on how risk assessments of people entering Canada are conducted as well as the differences in its immigration and visa policies. The northern border has also become another front for the war on terror and is now being patrolled by unmanned drones. While security at the U.S.-Canada border is being tightened, not enough is being done to protect the southern border. It is clear that the Obama administration wishes to relax immigration restrictions with Mexico and supports some sort of amnesty program. Further securing the northern border could be part of an effort to give the illusion that the U.S. government is taking action.

The Civil Assistance Plan was signed by the U.S.-Canadian military in February of 2008. The plan would allow the military of one nation to support the other during a civil emergency. The agreement goes well beyond any cross-border crisis. Even though it threatens the sovereignty of each country, there was no public debate and no Parliamentary or Congressional oversight. Similar to the SPP, the Civil Assistance Plan is shrouded in secrecy with missing annexes that remain classified. There are concerns that this agreement could lead to foreign troops being used for gun confiscation and a martial law scenario. Increasingly, the military is being used at sporting events, checkpoints and in some cases, in response to crime. Foreign troops are participating in more training exercises on American soil. Many military drills are also taking place in urban areas to further acclimate military presence on the streets.

An increased continental approach to security which includes law enforcement, border initiatives and the military could serve to further bind North America into a single foreign policy entity. A militarized security perimeter could be used to restrict, track and trace our movements. While some talk about further hardening the border, there is a focus to ensure that it remains open to the free flow of goods as well as cheap labor. There is little doubt that having secure borders should be a priority and that it is important to work together to achieve common objectives. This should not be at the expense of our sovereignty, privacy and freedom.

Dana Gabriel is an activist and independent researcher. He writes about trade, globalization, sovereignty, as well as other issues.
Contact: beyourownleader@hotmail.com
Posted by Dana Gabriel at 10:59 AM