Globalization: The Long and Winding Road 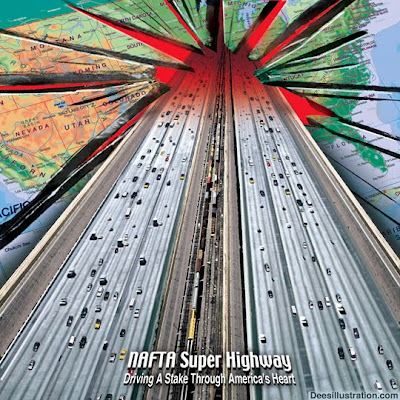 It has been widely announced that the Trans-Texas Corridor (TTC) is dead, as well as plans for a NAFTA Highway which many assured me never even existed in the first place. Unfortunately, these claims have been greatly exaggerated. In regards to the TTC/NAFTA Highway, the Security and Prosperity Partnership, and the North American Union agenda, we have won many battles, but we have not won the war. Deeper North American integration has been exposed on many different levels and has encountered fierce resistance. It is because of this that the globalists have had to somewhat retreat from their agenda. A move to renegotiate NAFTA could be used as a way to revive and expand upon the agreement. In the midst of all this economic turmoil, more globalization is being offered as the solution to the crisis.

The announcement by the Texas Department of Transportation proclaiming the TTC dead was more of a public relations stunt. It was designed to try and silence critics and appease Texas lawmakers. Let’s be clear, the TTC is dead in name only and has been replaced with the Innovative Connectivity plan. By scaling back the project and breaking it up into smaller segments, it is less intimidating and could make it more difficult to stop in the future. If you don’t succeed try and try again. In the case of the TTC, give it a makeover, change the name and put out a press release saying that it is dead. The original concept of the TTC had a price tag of over $180 billion and called for 4.000 miles of roadways, toll roads and rail lines. Some have referred to it as the first leg of a NAFTA Superhighway that would extend from the Texas-Mexico border to the Oklahoma state line. In whatever form a NAFTA Highway transportation system takes, it would facilitate the flow of foreign goods and be the necessary infrastructure needed for a North American Union, thus further connecting the economies of Canada, the U.S., and Mexico.


Those who have exposed plans for a NAFTA Superhighway and a North American Union have been ridiculed, branded liars, fearmongers and conspiracy theorists by the corporate controlled media and the establishment. Yet, there has been a House resolution stating congressional opposition to the construction of a superhighway and entry into a North American Union. Many states have also passed similar legislation. During the CNN/You Tube Republican Presidential debates, Ron Paul was asked if he believed in the North American Union conspiracy. Paul did acknowledge that there was a move towards a NAU and a NAFTA Superhighway. He referred to it as a conspiracy of ideas, an ideological battle with some believing in national sovereignty and others globalism.

President-elect Barack Obama recently met with Mexican President Felipe Calderon where he expressed a continued commitment to upgrade NAFTA. Many believe that this proves he will carry through on promises to renegotiate the agreement. It is interesting that the word upgrade was used as opposed to renegotiate. Calderon has publicly stated on many occasions that he is against changes to NAFTA, but more recently he said that he is open to reviewing environmental and labour provisions. He could use his desire for U.S. immigration reform as a bargaining tool to agree to such modifications. At the height of the NAFTA bashing during the Democratic Presidential campaign, Canadian officials threatened to put oil back on the table if the agreement was reopened, along with a list of other concessions. With Obama set to visit Canada after his inauguration, Prime Minister Stephen Harper said that he doubts the new president will question the agreement in any fundamental way. NAFTA is so badly flawed and minus a few cosmetic changes that might be made, the reality is that it will remain intact. There are also fears that the agreement could be expanded which might lead to a renewed push for North American integration.

Many are under the illusion that somehow Obama and the Democrats are going to save the American people and even the world. It is becoming increasingly clear that just like Bush, Obama has no intentions of protecting American sovereignty. Globalization has meant sacrificing self-sufficiency, sovereignty and independence for foreign dependency which can only lead to economic enslavement. Obama, like many past presidents, is nothing more then a puppet, a front man controlled by special interest groups, foreign banks and corporate powers who are pushing globalization and world government.

It is important that we remain vigilant and conscious of tactics used against us, word semantics and propaganda designed to lull us into a false sense of security. Construction of a NAFTA Highway could become a sort of make work project that employs millions, if jobless rates continue to climb and the current economic crisis worsens. Such an undertaking could be financed by foreign banks and corporations who are increasingly gobbling up much of North America’s key infrastructure and who ultimately control our economic future. A recent report released by the Pentagon warns that globalization and urbanization will further fuel social unrest in Mexico. Political, economic and social instability could be used to usher in a North American Union. We have a short window of opportunity to really turn things around and only an informed educated public will be able to defeat the New World Order.

Dana Gabriel is an activist and independent researcher. He writes about trade, globalization, sovereignty, as well as other issues.
Contact: beyourownleader@hotmail.com
Posted by Dana Gabriel at 9:16 AM