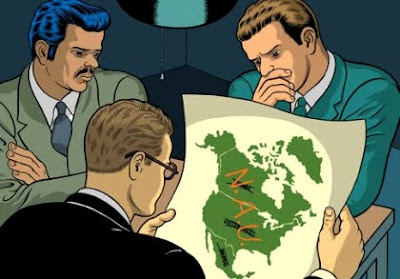 Many Canadians view a Barack Obama presidency as an opportunity to further renew Canada-U.S. relations. This includes a more North American approach in dealing with challenges that face not only the continent, but the world as well. The Security and Prosperity and Partnership (SPP), a trilateral initiative between Canada, the U.S. and Mexico, has stalled and in some cases, Canada-U.S. bilateralism has also been hampered. Many policy papers and reports are still calling for deeper North American integration.

The policy paper entitled "From Correct to Inspired: A Blueprint for Canada-U.S. Engagement" was released to the public in January of this year. It was prepared by the Carleton University's Centre for Trade Policy and Law and outlines how the Canada-U.S. partnership can be rejuvenated. It details how Canada can help Obama further reshape America's role in the world. At almost every turn, the report promotes stronger U.S. relations and emphasizes how Canada must present itself as a valued partner on broader global issues. The report recommends more Canada-U.S. bilateralism in areas of security, trade, energy, and the environment. It also proposes an annual bilateral summit between the two countries to foster more cooperation. It suggests that Canada's influence and visibility with the new administration might be reduced, if its mission in Afghanistan is not extended beyond 2011.


In addition, the Carleton University Canada-U.S. Project calls for deeper integration and recommends moving beyond NAFTA through separate North American bilateral initiatives. This would still be within the trade agreements framework. On Obama's pledge to fix NAFTA's labour and environmental provisions, the report notes that Canada should not worry, as any such move is directed more towards Mexico. It does caution against Canada using its energy resources as a weapon and bargaining tool. The report acknowledges the failures of the SPP and calls for wholesale changes. It blames the sometimes unnecessary inclusion of Mexico from preventing more meaningful Canada-U.S. bilateralism. According to the report, Canada should pursue a NAFTA policy of trilateralism when necessary, but on certain matters, Canada-U.S. bilateralism should be a priority.

A recent trilateral effort put forward by the Arizona State University's North American Center for Transborder Studies, also calls for deeper integration. In the policy paper entitled "North America Next: A Report to President Obama on Building Sustainable Security and Competitiveness," it urges the new administration to further improve relations with its NAFTA partners. The goal is to build a more North American strategy and it suggests that this could be achieved through further energizing and expanding the current Trilateral Leaders Summit. The report calls for developing an effective North American trade and transportation plan, which would include an integrated multimodal transportation system. This sure sounds like the NAFTA Superhighway! According to the report, this could be partly paid for by a joint, revolving fund for infrastructure investment. The report also calls for harmonizing freight transportation standards, a special trucker visa, along with complete NAFTA truck access inside all three countries. There has been an ongoing battle to prevent Mexican long-haul trucks access to U.S. roadways beyond the current 25 mile commercial zone restriction.

In advance of Obama's visit to Canada, a coalition of organizations was stressing the importance of Prime Minister Stephen Harper to commit to a transparent and thorough renegotiation of NAFTA. The Canadian coalition included the Council of Canadians, the Sierra Club of Canada, the Canadian Auto Workers and the Canadian Federation of Students, as well as other organizations. In the letter addressed to Harper, they call for the elimination of the energy clause in NAFTA, which requires Canada to export oil and gas to the U.S., even in time of shortages. They also recommend that the prime minister place a moratorium on the negotiation and ratification of all Canadian bilateral free trade agreements, as well as an end to the SPP. There are other concerns in regards to NAFTA as many Canadians would like to see water excluded from the agreement. This includes a ban on bulk water transfers, along with safeguards against NAFTA Chapter 11 challenges.

There are fears that under an Obama presidency that many on the left will go to sleep, now that Bush is out of office. This includes in Canada, where the left have been instrumental in exposing the SPP and fighting deeper integration into a North American Union. In most instances, North American integration is still very unpopular, but this is a very deep-rooted agenda. Even with a new president, it will likely carry on in some form or another. It is imperative that concerned citizens in Canada, the U.S. and Mexico continue to resist any move towards a North American Union.

Dana Gabriel is an activist and independent researcher. He writes about trade, globalization, sovereignty, as well as other issues.
Contact: beyourownleader@hotmail.com
Posted by Dana Gabriel at 9:49 AM