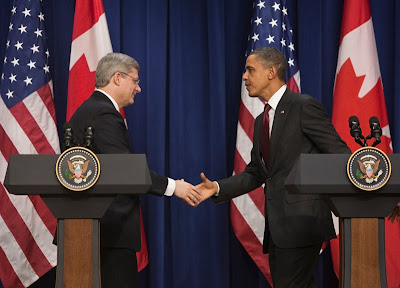 On February 4, President Barack Obama and Prime Minister Stephen Harper issued a declaration which, “establishes a new long-term partnership that will accelerate the legitimate flows of people and goods between both countries, while strengthening security and economic competitiveness.” Beyond the Border: a Shared Vision for Perimeter Security and Economic Competitiveness will, “focus on four areas of co-operation: addressing threats early; trade facilitation, economic growth and jobs; integrated cross-border law enforcement; and critical infrastructure and cyber-security.” According to the declaration, both nations will, “develop a joint action plan on perimeter security and economic competitiveness that will set out a range of initiatives in the four key areas to improve both countries’ ability to manage security risks, while facilitating the flow of people, goods and services.” The newly formed Beyond the Border Working Group will, “report to their respective Leaders in the coming months, and after a period of consultation, with a joint Plan of Action to realize the goals of this declaration.” The agenda set forth is nothing more than a rehashing of some of the SPP's security priorities, but without Mexican involvement.

President Obama and Prime Minster Harper also addressed ways to coordinate and harmonize regulations in order to ease red tape for businesses that do trade on both sides of the border. They announced the creation of the United States-Canada Regulatory Cooperation Council (RCC) which will, “promote economic growth, job creation, and benefits to our consumers and businesses through increased regulatory transparency and coordination.” According to a joint statement, the leaders, “are committed to working through the RCC to provide early notice of regulations with potential effects across our shared border, to strengthen the analytic basis of regulations, and to help make regulations more compatible.” Both countries will also, “work through the RCC to determine sectors on which to focus its work that are characterized by high levels of integration, significant growth potential, and rapidly evolving technologies.” Improving regulatory cooperation was a key element of the SPP’s prosperity agenda. Its stated goals are laid out in the SPP Regulatory Cooperation Framework.

At a Joint Press Conference following their bilateral meeting, President Obama proclaimed, “we agreed to a new vision for managing our shared responsibilities — not just at the border but ‘beyond the border.’ That means working more closely to improve border security with better screening, new technologies and information-sharing among law enforcement, as well as identifying threats early.” He went on to say, “We’ve directed our teams to develop an action plan to move forward quickly. And I’m confident that we’re going to get this done so that our shared border enhances our shared prosperity.” Prime Minister Harper explained, “The declaration President Obama and I are issuing today commits our governments to find new ways to exclude terrorists and criminals who pose a threat to our peoples. It also commits us to finding ways to eliminate regulatory barriers to cross-border trade and travel.” Harper also pledged his undying support to his U.S. partner, “I have said before, a threat to the United States is a threat to Canada -- to our trade, to our interests, to our values, to our common civilization. Canada has no friends among America’s enemies, and America has no better friend than Canada.”

During the news conference, there was clearly an attempt by the leaders to preemptively address any sovereignty fears associated with their announcement. Harper acknowledged, “The declaration marks the start of this endeavor, not the end; an ambitious agenda between two countries, sovereign and able to act independently when we so choose according to our own laws and aspirations.” When answering a reporter’s question on sovereignty and privacy concerns, Harper reassured that, “this declaration is not about sovereignty. We are sovereign countries who have the capacity to act as we choose to act. The question that faces us is to make sure we act in a sovereign way that serves Canada’s interests.” Obama chimed in, “With respect to security issues and sovereignty issues, obviously, Canada and the United States are not going to match up perfectly on every measure with respect to how we balance security issues, privacy issues, openness issues.” He also added, “I have great confidence that Prime Minister Harper is going to be very protective of certain core values of Canada, just as I would be very protective of the core values of the United States, and those won’t always match up perfectly.”

This new bilateral undertaking is being sold as vital to the safety and prosperity of both countries. Despite claims that it would not result in either side surrendering sovereignty, many concerns remain, especially from a Canadian perspective. Thus far, the whole process has lacked transparency and any input from the public. This has drawn comparisons to the SPP which from the beginning, was shrouded in secrecy and fueled by fears over the loss of sovereignty that ultimately led to its downfall. Any deal which could give the U.S. Department of Homeland Security more influence over Canadian border security and immigration practices, poses a risk to sovereignty and privacy rights. There are also concerns over increased information-sharing with other American law enforcement agencies. A North American security perimeter would be defined and dominated by U.S. interests. It would force Canada to make significant sacrifices in regards to sovereignty which could dramatically change the country forever.

Dana Gabriel is an activist and independent researcher. He writes about trade, globalization, sovereignty, security, as well as other issues. Contact: beyourownleader@hotmail.com Visit his blog at Be Your Own Leader
Posted by Dana Gabriel at 5:41 PM