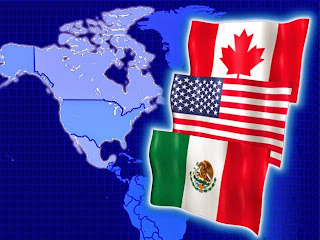 The CFR-sponsored Independent Task Force on North America, co-chaired by retired General David Petraeus and former president of the World Bank Robert Zoellick, recently released their report, North America: Time for a New Focus. The Task Force maintained that, “Now is the moment for the United States to break free from old foreign policy biases to recognize that a stronger, more dynamic, resilient continental base will increase U.S. power globally.” They explained that, “If the three North American countries deepen their integration and cooperation, they have the potential to again shape world affairs for generations to come.” The Task Force also described how, “Recent developments have created opportunities for the North American countries to build on past work and to advance their partnership to a new stage.” The move by Mexico to open up its energy sector to private investment, along with increased oil and natural gas production in Canada and the U.S. are some of the driving forces behind the renewed push for deeper North American integration.
Read more »
Posted by Dana Gabriel at 6:46 PM