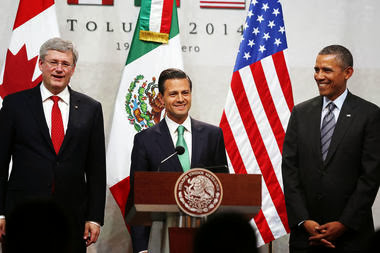 On February 18, in advance of the North American Leaders Summit, Prime Minister Stephen Harper held discussions with Mexican President Enrique Pena Nieto. After their meeting, they signed a number of deals designed to further deepen bilateral relations. This includes two agreements which promote new trade opportunities between Canada and Mexico. They also announced a declaration of intent to expand defence cooperation, “which demonstrates a continued commitment by both countries to work together on security issues facing North America.” It is scheduled to be officially signed in April and, “will outline the manner in which enhanced bilateral cooperation will take place in areas such as military training, and defence research and materiel.” The two leaders also renewed the Canada-Mexico Joint Action Plan that provides a framework for engagement on important issues such as fostering competitive and sustainable economies, protecting our citizens, enhancing people-to-people contacts, as well as projecting our partnership globally and regionally.
Read more »
Posted by Dana Gabriel at 7:05 PM