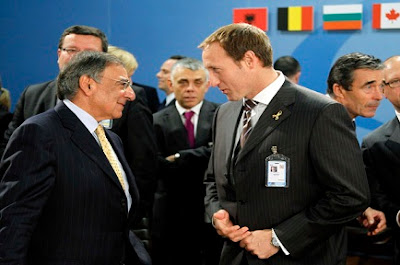 Canadian Defense Minister Peter MacKay recently met with U.S. Secretary of Defense Leon Panetta to discuss bilateral security cooperation issues. In a news release, Minister Mackay praised the Canada-U.S. partnership as unique and explained, “Our binational command in NORAD, as well as the daily operation between our military and defence teams is a tangible demonstration of how we stand shoulder to shoulder with the United States in the defence of North America and in addressing common global challenges.” He went on to say, “We are proud to work alongside our U.S. friends in the Americas, in Libya, in Afghanistan, and as transatlantic partners of NATO.” At a press conference following their meeting, Secretary Panetta acknowledged that both countries are looking to improve their bilateral engagement in the Western Hemisphere. He stated, “If we can develop better capabilities and partnerships throughout the hemisphere, that's something that I think both of us consider to be a real step forward in our relationship.” Future plans could also include expanding a security perimeter framework beyond North America.
Read more »
Posted by Dana Gabriel at 5:28 PM