Canada is under pressure from U.S. officials to further comply with American security rules which in some cases, threatens its sovereignty and the privacy of its citizens. As a result of the war on terrorism, the U.S. government now has more power to restrict air travel and is not only dictating North American, but also international security measures.

Bill C-42, An Act to amend the Aeronautics Act would require Canadian airline carriers that fly over the U.S. to provide the Department of Homeland Security (DHS) with passenger information. This includes name, date of birth, gender, as well as passport and itinerary details when applicable. Airlines landing in the U.S. already have to supply this information, but allowing personal data to be shared on passengers who are only flying through American airspace essentially shreds existing Canadian protection and privacy laws. Bill C-42 complies with the Transportation Security Administration’s (TSA) Secure Flight Program which would take effect globally at the beginning of next year. Most Canadian commercial flights pass over the U.S. while en route to Latin America, the Caribbean and Europe which in many cases would give the DHS the final say on who is allowed to travel to and from Canada.
Read more »
Posted by Dana Gabriel at 3:47 PM 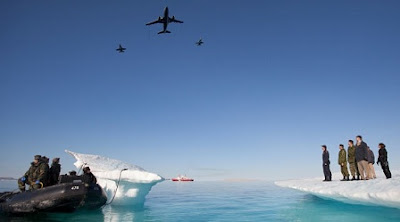 Some have called the release of Canada's Arctic Foreign Policy statement in August, a significant shift from the Conservative government’s often hostile approach in addressing sovereignty issues in the far north. The policy paper declared that, “Canada’s vision for the Arctic is of a stable, rules-based region with clearly defined boundaries.” It plans to pursue its interests through leadership, stewardship, diplomacy and respect for international law. Canada also seeks a more strategic engagement with the U.S. in the Arctic. Over the summer, they conducted their third joint continental shelf survey. The U.S. and Canada are gradually moving towards merging their Arctic foreign policies and further adopting a more North American strategy. While Canada is placing more emphasis on cooperation and appears ready to resolve boundary disputes, absent is any concrete suggestion on how to engage Russia. Both have claimed the Lomonosov Ridge under the Arctic as an extension of their respective continental shelves. Any aggressive moves to enforce sovereignty in the area could jeopardize future bilateral relations and lead to a possible confrontation.
Read more »
Posted by Dana Gabriel at 11:22 AM