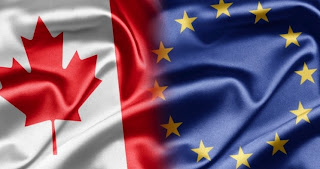 With the final rounds of negotiations sessions planned for September and October, Canada and the EU are closing in on a free trade deal that would go far beyond the reach of NAFTA. Meanwhile, there is growing opposition to the agreement as the whole process has lacked openness, transparency and any public consultations. In Canada, there are concerns over the threat it poses to local democracy. This includes fears of deregulation and privatization, as well the expansion of corporate investor rights. There are also warnings that the deal could be used as a backdoor means to implement ACTA which was rejected by the European Parliament in July.

As the Canada-European Union (EU) Comprehensive Economic and Trade Agreement (CETA) talks near their end, the Council of Canadians continue to voice their opposition to the deal. While I don’t agree with their position on some different issues, they have been championing the fight against CETA. In an effort to counter misleading statements made by the Conservative government regarding the trade pact, they have released the report, the CETA Deception. Trade campaigner, Stuart Trew explained how this is an effort to, “challenge the government’s reassurances that its EU trade deal will not affect public health or environmental regulations, will not allow foreign corporations to challenge public policy, will not undermine public services or municipal democracy, will not increase drug prices or hurt Canada’s supports for arts and culture. In each case, the government’s position is either misleading or demonstrably false.” As a result of the threat CETA poses to local sovereignty, a growing number of Canadian municipalities have passed resolutions seeking more information and a greater say in negotiations with some also requesting to be excluded from the agreement.
Read more »
Posted by Dana Gabriel at 4:24 PM

(Originally published in October of 2008)

Canada and the European Union (EU) are set to begin preliminary discussions on deeper economic integration a mere three days after the election. It has been reported that the proposed trade deal will far exceed NAFTA. Some see this as an opportunity to possibly update the 15 year-old accord. Stephen Harper is busy telling Canadians that only a Conservative majority government will be able to bring confidence back and stabilize the economy. That is why I find it a little strange that this has not become a pillar of the Conservatives economic platform. Harper has decided not to release the full text of the draft proposal until after the election on October 14. The reality is that such an agreement with the EU will be no different than NAFTA in the sense that it will be used to further advance corporate interests.

For the past several months, Canadian officials have been hard at work negotiating with EU representatives. They have compiled a detailed study that will be unveiled after the election. Talks could begin as early as October 17 at a summit in Montreal , with formal negotiations set to begin in 2009. Just as the case with the Security and Prosperity Partnership (SPP) labour, citizen groups and the public at large have been excluded from any discussions. Many support this trade initiative because they wish to lessen Canada’s dependency on the American economy. This agreement has a better chance of succeeding if Harper is re-elected Prime Minister. There still remains much secrecy surrounding trade talks with the EU, and up to this point, Harper appears to be reluctant to make this an election issue.
Read more »
Posted by Dana Gabriel at 6:49 PM