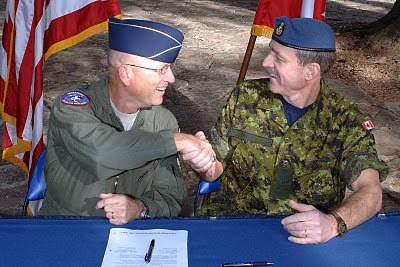 In 2002, then U.S. Defense Secretary Donald Rumsfeld, announced the creation of NORTHCOM, and boasted that it would have jurisdiction over all of North America. In an article by Michel Chossudovsky, he states the, “redesign of Canada’s defense system is being discussed behind closed doors, not in Canada, but at the Peterson Air Force base in Colorado, at the headquarters of US Northern Command (NORTHCOM).” He went on to say, “Under an integrated North American Command, a North American national security doctrine would be formulated.” In addition, this is taking place through the SPP and poses a serious threat to Canadian sovereignty and any resemblance of an independent foreign policy.
Read more »
Posted by Dana Gabriel at 2:30 PM 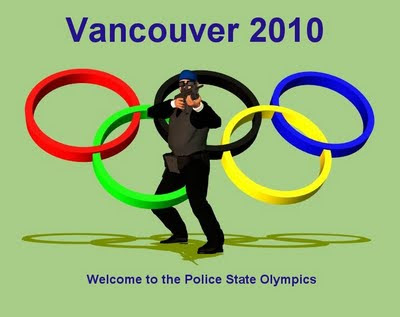 In advance of the 2010 Winter Olympics, critics of the Games have been subjected to surveillance, harassment, along with other intimidation tactics. Voicing opposition to the Olympics appears to be all that is needed for one to be labeled as a security threat. There are concerns over the negative impacts associated with holding the Games, as well as concerted efforts to stifle anti-Olympic expression. As the Coca-Cola/RBC corporate torch relay nears its final destination, the opening ceremonies in Vancouver on February 12, 2010, more protests are expected. The Olympics are providing the perfect cover for many police state measures with ramifications that could leave a lasting legacy.

In a recent report, the Civil Liberties Advisory Committee (CLAC), an Olympic watchdog group issued a series of recommendations aimed at ensuring that rights and freedoms are respected during the Winter Games. The group strongly believes that protesters have a right to gather anywhere on public property, provided that they do not break the law. In regards to safe protest zones, CLAC favors that they be defined by painted lines on sidewalks or streets and not by fences or security barriers. This gives the perception that protesters are a threat. The watchdog group proposed that the Vancouver Police Department (VDP) be given the lead role in dealing with Olympic protests. This is due to concerns over mistrust of the RCMP in the province of BC as well as out of town police officers being, “unfamiliar with the groups and practices associated with peaceful protests here." CLAC also recommended that, “the Integrated Security Unit issue a public assurance that plain-clothes police officers or other plain-clothes agents will not actively participate in protests during the Olympics.” There are fears that police could infiltrate anti-Olympic groups, in order to stage events which would justify a crackdown during the 2010 Winter Games.
Read more »
Posted by Dana Gabriel at 4:00 PM