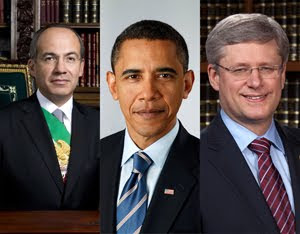 While much of my focus has been on the U.S.-Canada Beyond the Border and the Regulatory Cooperation Council (RCC) action plans, the U.S. is also pursuing a similar agenda with Mexico. This includes working towards a common security perimeter. In 2010, the U.S. and Mexico issued the Twenty-First Century Border Management declaration. This established the Executive Steering Committee (ESC) to implement joint border related projects to enhance economic prosperity and security. In December of last year, the ESC adopted its 2012 action plan which sets goals in areas of binational infrastructure coordination, risk management, law enforcement cooperation, along with improving cross-border commerce and ties. A press release explained that through the ESC, “we are developing and managing our shared border in an integrated fashion to facilitate the secure, efficient, and rapid flows of goods and people and reduce the costs of doing business between our two countries.” The ESC meeting also acknowledged bilateral accomplishments in expanding the use of trusted traveler initiatives such as the Global Entry Program.

In May of 2010, U.S. President Barack Obama and Mexican President Felipe Calderon directed the creation of the High-Level Regulatory Cooperation Council (HLRCC). In February of this year, the HLRCC released a work plan whereby the U.S. and Mexico will seek greater regulatory alignment in the areas of food, transportation, nanotechnology, e-health, as well as oil and gas development standards. The U.S. Chamber of Commerce applauded the plan for enhanced regulatory cooperation between both countries. The terms of reference for the HLRCC also recognized that, “some regulatory challenges require trilateral cooperation among the three Parties to the North American Free Trade Agreement (NAFTA), the United States and Mexico intend to involve the Government of Canada when it is necessary to focus on issues of common interest in North America.” The U.S.-Mexico HLRCC has similar goals to the U.S.-Canada RCC. At some point, these dual-bilateral councils could come together to form a single continental regulatory regime.

In his article, the road to Washington runs through Mexico, Robert Pastor, who has been a leading proponent of North American integration, criticized Canada’s continental policy. He argued that, “Instead of collaborating with Mexico to persuade the United States to address shared problems and opportunities in North America, Canada has excluded Mexico and approached the U.S. on its own.” Pastor offered potential reasons for this strategy, “Some suggest Canadians fear being tainted by association with Mexico’s violence. Others believe its ‘special relationship’ with the United States gives it an advantage that it would lose if it allied with Mexico. And some think that two countries can walk faster than three.” He further elaborated on his position, “Prime Minister Stephen Harper’s insistence on bilateralism — or rather ‘dual-bilateralism’ because the U.S. has to deal with Mexico too — has not worked. Regulations will not be harmonized; a uniform set of customs forms and traveller IDs will not be implemented; a continent-wide transportation and infrastructure plan will not be contemplated without a clear vision and strategy by and for North America.”

Robert Pastor’s op-ed which appeared in the Toronto Star also conceded that, “Working the U.S. Congress by itself, neither Canada nor Mexico can secure its goals. Working together, with the support of the Obama administration, the three governments could design a seamless market and eliminate an expensive, inefficient tax based on rules of origin.” He recommended, “Instead of competing against each other to gain access to Asian markets, our three countries should focus on continental competitiveness and approach China together on issues related to currency, unfair trade practices and climate change.” He insisted, “If Canada were to change its ‘divide-and-be-conquered’ strategy to a ‘unite-and-govern together’ approach on the new North American agenda, Mexico and the U.S. would join, as they did with NAFTA. And Canada could achieve its goals and the continent’s at the same time.” Pastor further lays out his plan to rejuvenate trilateral integration in his book, the North American Idea: A Vision of a Continental Future.

The Woodrow Wilson Center hosted an event in December 2011 entitled the Death of Trilateralism in the NAFTA Neighborhood, which examined the evolution of regional economic cooperation between the U.S., Canada and Mexico. During the proceedings, a panel agreed that the death of trilateralism has been exaggerated, but pointed out that, “dual-bilateralism, in which the United States works with Canada and Mexico separately, has become more common. Participants noted this is particularly apparent when dealing with regulatory, energy, and border issues. Countries are still, however, looking to harmonize and work toward trilateralism.” The meeting called for greater regional engagement and emphasized, “the need to focus on issues such as regulatory cooperation, infrastructure, and border efficiency.” Discussions also centered around whether North America needed a grand new plan to move deep integration forward.

On April 2, President Barack Obama will host the sixth North American Leaders Summit which will include the participation of Canadian Prime Minister Stephen Harper and Mexican President Felipe Calderon. According to a statement by the press secretary, the meeting will, “focus on economic growth and competitiveness, citizen security, energy, and climate change.” While announcing the upcoming summit, Prime Minister Harper praised the NAFTA trilateral relationship, “Canada, the United States and Mexico have forged a strong partnership built on free and open trade and close cooperation on security.” He went on to say, “The government’s number one priority remains the creation of jobs, growth and long-term prosperity for all Canadians, particularly through trade, including with our close friends the United States and Mexico.” The NAFTA governments are looking to expand trade with other countries. This includes Canada and Mexico’s efforts to join the U.S., along with other nations already engaged in the Trans-Pacific Partnership trade talks. The forthcoming North American Leaders Summit will be the first since 2009, which has caused some to question the current state of trilateralism.

When it comes to continental integration, the U.S. has shifted much of its focus to pursuing dual-bilateral agendas with both Canada and Mexico. This includes efforts to establish a North American security perimeter. At some point, these parallel initiatives could converge into one. While it is unlikely that the upcoming leaders summit will bring about any grand new plan, it could be used as a starting point to revive the whole trilateral process. With the NAFTA framework still intact, the vision for a North American Union has not been abandoned.

Dana Gabriel is an activist and independent researcher. He writes about trade, globalization, sovereignty, security, as well as other issues. Contact: beyourownleader@hotmail.com Visit his blog at Be Your Own Leader
Posted by Dana Gabriel at 4:43 PM