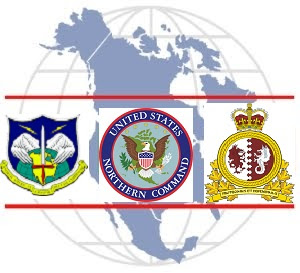 While few details have emerged surrounding talks between the U.S. and Canada on a North American security perimeter, there is little doubt that deeper military integration between both countries will play an important part of any such deal. Plans for a common security perimeter have renewed calls to expand the NORAD bilateral air defense model to include ground and naval forces. There are also efforts to increase security cooperation in the Arctic and further integrate military command structures.

As part of the Tri-Command Vision, North American Aerospace Defense Command (NORAD), United States Northern Command (USNORTHCOM), and Canada Command (Canada COM) are working closer together in the defense and security of North America. Moving forward, the Tri-Command strategic goals are to, “Improve unity of effort with each other and with our respective mission partners; develop a culture of continuous collaboration and cooperation in planning, execution, training, information management, and innovation; enhance intelligence and information sharing and fusion.” In order to better achieve these objectives, “The Commands shall develop and share comprehensive, situational awareness and a common operating picture, and must strive to interact seamlessly with each other and with our respective civil authorities, non-governmental organizations and other mission partners.” The Tri-Command is part of efforts to merge the three commands into one.


In his report, Now for the Hard Part: A User's Guide to Renewing the Canadian-American Partnership, Colin Robertson, Vice President and Senior Research Fellow at the Canadian Defence and Foreign Affairs Institute outlines a plan of action for future bilateral relations. With respects to what a common security perimeter deal might look like, he proposed, “Start by extending to our land and sea environments the interoperability that our Air Force already enjoys through NORAD. It will require our Forces in Canada Command to match their current crossservice ‘jointness’ with those of American Forces employed in Northern Command.” Robertson added, “A security perimeter will also go some distance to resolving the remaining disputes and the shared challenges around stewardship, sovereignty and surveillance of the North West Passage and the activities of foreign ships and submarines in Arctic waters.” In a prelude to what joint security in the Arctic might look like, last year's Operation Nanook, an annual Canadian Forces sovereignty exercise included military participation from the U.S. and Denmark.

In their report, From Vision to Action: Advancing the Canada – United States Partnership, the Canadian Council of Chief Executives (CCCE) issued a wide range of proposals as part of the public consultation process regarding negotiations on a trade and perimeter security agreement. This included recommendations concerning NORAD, as well as shared Arctic security. In the section titled, extending the NORAD model of bilateral engagement, the CCCE emphasized that, “Canada and the United States should extend existing bi-national air perimeter defense arrangements under the North American Aerospace Defense Command (NORAD) to incorporate what is already an increasing maritime interoperability.” As part of strengthening the northern security perimeter, the CCCE explained, “The Canadian Governments Northern Strategy recognizes that the United States is Canada’s ‘premier partner’ in the Arctic. We welcome the commitment to work together on a common security agenda for the North.” Both countries are moving towards merging their Arctic foreign policies and further adopting a North American approach.

In April of this year, the U.S. Department of Defense released the Unified Command Plan 2011 which updated, “geographic areas of responsibility for commanders of combatant commands.” The adjustment brought about, “Shifting areas of responsibilities boundaries in the Arctic region to leverage long-standing relationships and improve unity of effort. As a result of this realignment, responsibility for the Arctic region is now shared between USEUCOM and USNORTHCOM.” This change to the Unified Command Plan reflects the growing importance of the Arctic. With the move, USNORTHCOM has been given the responsibility to advocate for Arctic capabilities. This is significant considering its partnership with Canada COM, as well as NORAD and will facilitate with the development of an integrated Arctic security framework.

In a posting on his Commander’s Blog, Admiral James A. Winnefeld, Jr., commander of USNORTHCOM and NORAD addressed some of the challenges the U.S. faces in the Arctic. He confirmed that the region is becoming one of USNORTHCOM’s most important with its areas of responsibility now expanded to include the North Pole and the Bering Strait. Winnefeld stated, “In close coordination with the Commander of USEUCOM, our interagency partners and our close Canadian partners, we will work to gain an understanding of our gaps in this unique and austere environment and identify future capabilities and requirements.” He went on to say, “Our responsibility in the Arctic is a recognition of our close, enduring and vital relationship with Canada Command and the U.S. Coast Guard.” During a bilateral meeting earlier this year, U.S. Secretary of Defense Robert Gates and Canadian Minister of National Defense Peter MacKay discussed the need to further strengthen the U.S.-Canada defense relationship. This included expanding cooperation in the Arctic and deepening coordinated contributions to global security.

Increasingly, the Canadian government’s foreign policy is becoming more aggressive as it further embraces the U.S. pro-war agenda. Military spending is at its highest point since the second World War. There are reports that Canadian Forces are looking to establish bases overseas. In an effort to gain more influence in Washington and elevate its status in NATO, Canada has taken on a key role in military operations in Libya. It has extended its mission in Afghanistan which has transitioned from a combat role to a training capacity. There are also growing concerns over its decision to purchase 65 F-35 Joint Strike Fighter jets which is tied to plans for a North American security perimeter.

The end results of a fully integrated continental security perimeter could sacrifice what is left of Canadian sovereignty and independence. This could bring its military, security and foreign policy under the umbrella of a single, U.S.-dominated North American Command.

Image by NAUresistance
Posted by Dana Gabriel at 4:11 PM