It appears as if the G20 summit in Toronto is shaping up to be a showdown between anarchists and police. Caught in the middle of the security circus are local residents. If there is violence and property damage, peaceful protesters will also be demonized. The recent bombing of a bank, perpetrated by a so-called anarchist group, has given an excuse to enact more police state measures during the summit. The curious timing of the attack emphasizes the threat of terrorism and further justifies the huge security apparatus being assembled.

A group calling itself FFFC-Ottawa has claimed responsibility for the recent firebombing of a Royal Bank of Canada (RBC) branch. It was targeted because of the RBC’s sponsorship of the Vancouver Winter Olympic Games, as well as its role in financing Alberta’s tar sands projects. The group has threatened to make an appearance at the meetings. “On June 25-27 2010, the G8/G20 ‘leaders’ and bankers are meeting in Huntsville and Toronto to make decisions that will further their policies of exploitation of people and the environment. We will be there.” Some have labelled the bombing as an act of domestic terrorism and have compared the radical anarchist community to terrorist groups. There are fears that the incident might inspire copycat attacks. With Toronto set to play host to the G20, it has become a national security issue. The Canadian Security Intelligence Service recently warned of homegrown terror in Canada. It is also interesting to note that in an effort to revive post-9/11 powers in late April, the Conservative government introduced the Combating Terrorism Act.

The G20 Integrated Security Unit continues to monitor any potential threats. Police are now asking truck drivers and carriers to act as lookouts before and during the G8/G20 summits. This includes reporting on suspicious behaviour or irregular activity in regards to terrorism, extremists, anarchists, public order (protests), along with any other threats. There are already various programs training citizens to fight terrorism and crime which are part of ongoing efforts to create a domestic spying system. It is unclear if the recent bombing was an isolated incident or part of a trend that could lead to more domestic political violence in Canada. Many likeminded individuals and groups have tried to distance themselves from FFFC-Ottawa while others have defended their actions. There is speculation that the attack might have been a false flag operation carried out by agent provocateurs to blame anarchists and give police a reason to further ramp up security. Some anarchists are still vowing to disrupt the meetings with threats of confronting the police state and the corporate culture.

Queen’s Park North is now the location of the designated demonstration area during the G20 summit. It was changed after residents opposed a plan to use Trinity-Bellwoods Park. Some activists reject the notion of an official protest site, but if they choose to gather elsewhere it could lead to arrests. Ultimately, police tactics and behaviour will play a big part in determining the outcome of any protests. The Canadian Civil Liberties Association stated, “Freedom of expression is protected throughout Canada: our country, and all of Toronto is a ‘free speech zone.’ Protesters cannot be prevented from demonstrating outside of the‘designated demonstration area,’ particularly when the area set aside is situated in a place that is so remote from the meetings that protesters cannot be directly seen or heard by the leaders." All protesters voices need to be heard, but they must remain peaceful as any violence will taint their message and provoke a police response.

In support of preparations for the G8/G20 summits, there has been more security drills In early May, the North American Aerospace Defense Command (NORAD) conducted Exercise Amalgam Virgo which involved military aircraft flying at low altitudes over the south-central Ontario region. With the meetings fast approaching, additional security measures are being implemented across Toronto. Over 70 new CCTV cameras are being installed throughout the city’s downtown core. Due to security concerns, the CN Tower will be closed to the public during the summit. The Toronto Blue Jays series has also been moved to Philadelphia for security reasons. Police are expected to release more details about the size of the planned security zone within the next week. It was already announced that there will be an outer and inner security perimeter. As a result of the bank bombing, there are calls for an extra 500 police for the event. This is on top of the over 5000 officers who will be deployed, along with thousands of private security personnel and an unspecified number of Canadian soldiers. A Toronto Police Accountability Bulletin proclaimed, “In the name of security, the police are being given a very free hand with the city.”

The G20 summit will undoubtedly promote globalization and advance the goals of world government. This will benefit bankers and multinational corporations at the expense of the poor and middle class. The fact that it is being held in Toronto signifies that Canada is further falling under the control of the new world order system. The event will provide a perfect opportunity to push the Canada-European Union Comprehensive Economic and Trade Agreement currently being negotiated. Canada has fared better then most countries during the current financial crisis, but deeper economic ties with Europe could prove disastrous. In many ways, the whole security operations for the G8/G20 summits are a sideshow designed to serve as a distraction. Any violence and mayhem before or during the meetings plays right into the globalists hands and will be used to justify a police state crackdown.

Dana Gabriel is an activist and independent researcher. He writes about trade, globalization, sovereignty, as well as other issues. Contact: beyourownleader@hotmail.com 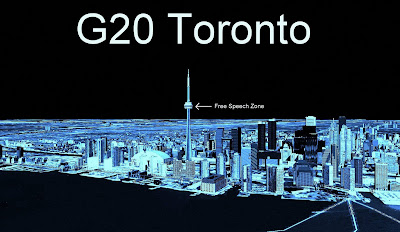 Police State 4: The Rise Of FEMA