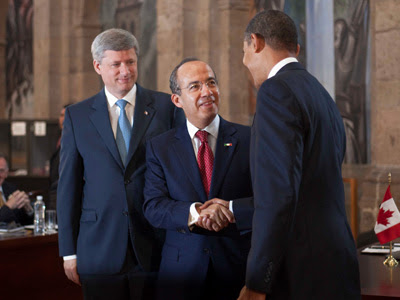 Some have described the Canada-Mexico partnership as a failed opportunity with Ottawa more preoccupied with U.S. concerns. Mexican President Felipe Calderon’s recent trip to Canada was seen as a chance to strengthen bilateral bonds and push for more trade and investment between the two NAFTA partners. In a press statement Calderon highlighted, “The reason for this visit is to consolidate and expand our bilateral relationship at all levels.” While addressing a joint session of Parliament, he called for closer ties with Canada and the United States. He emphasized that, “Integration is key to restoring strong sustained growth in North America.” Calderon characterized Mexico as a, “valuable neighbor and a strategic partner for the future of North America's prosperity.” His message was clear as he championed the need for deeper economic integration and warned against protectionism. Also on the agenda was North American security as Canada is being called upon to expand and deepen cooperation with Mexico on police and judicial issues.

At the 2009 North American Leaders Summit, Prime Minister Stephen Harper announced that Canada was working with the U.S. and Mexico in the fight against drug trafficking and transnational organized crime. He launched the Anti-Crime Capacity Building Program which will invest $15 million per year and, “expand Canadian law enforcement and criminal justice capacity building assistance to targeted states in the Americas. Assistance will be provided for projects that reflect Canada's policy priorities and obligations within the key international anti-crime conventions. This includes illicit drugs, corruption, human trafficking, money laundering, security system reform and crime prevention.” Under the program, Canada has already provided RCMP personnel and funding to help train Mexican Federal police. During Calderón’s recent visit, “Canada and Mexico also announced several (other) anti-crime capacity building projects that the Government of Canada will be undertaking to support Mexico’s robust and ongoing efforts to combat corruption and reform its legal system. This includes training for Mexican judges and lawyers and a harmonization of Mexico’s criminal law.”

An updated air transport agreement, as well as a number of other bilateral initiatives were also reached during Calderón’s state visit to Canada. In addition, there was a Memorandum of Understanding on Youth Mobility which, “will simplify and facilitate the administrative procedures for qualified Canadian and Mexican youth, aged 18 to 29, to travel and work in each other’s country for up to one year.” This could be a precursor to a larger labour mobility agreement. Canada and Mexico signed a Joint Action Plan aimed at, “fostering competitive and sustainable economies, protecting our citizens, enhancing people-to-people Contacts and projecting our partnership globally and regionally.” Harper proclaimed, “We are setting the stage for the next decade of growth and cooperation between our two countries,” He went on to say, “The initiatives signed today demonstrate that we are deepening our relations in a wide number of areas that will benefit both our peoples.”

Before his trip to Canada, Calderon was in Washington to meet with President Barack Obama where border security and Mexico’s drug war were high on the agenda. He was very critical of Arizona’s Senate Bill 1070 which allows police to question and detain suspects who can't prove citizenship. The Obama administration has threatened a legal challenge to the new law. The bill is the result of growing frustration over the lack of immigration enforcement. Other states are looking to pass similar legislation in efforts to curb illegal immigration. Perhaps feeling the heat, Obama recently announced plans to send 1,200 troops to U.S.-Mexico border to counter cross-border drug and weapons trafficking. The move was seen by some as more of a symbolic gesture and a political ploy to try and win over Republican support for immigration reform. It was later reported that the National Guard soldiers would not be used to stop illegal immigration. Former U.S. Congressman Tom Tancredo acknowledged, “The desire is not to fix the problem. The desire is to have amnesty. All of this is in anticipation of amnesty.” Many aspects concerning comprehensive U.S. immigration reform are closely tied to a common perimeter approach to border management and security which could later include harmonization of immigration and customs standards.

While addressing a joint meeting of Congress, Calderon said, “Mexico is a country in transformation. This is making us an even more strategic partner for the future prosperity of the American people. The world is more global and more interconnected every day. It is also divided into large economic regions. Those regions that maximize their comparative advantages will be the ones that succeed. And we both need to compete with Asia and with Europe. Mexico and the United States are stronger together than they are apart.” He also added, “So I invite you to work with Mexico and consolidate North America as the most competitive region in the world.” A joint statement by the leaders declared that, “The bilateral dialogue between Presidents Obama and Calderon underscores their commitment to strengthening the strategic partnership between both countries, and they will continue working closely together in bilateral, trilateral, and multilateral fora over the coming months, as befitting two partners and nations uniquely important for the well-being, prosperity and security of one another.” Calderon used his visits to the U.S. and Canada to boost NAFTA relations. He was not shy about his wish for deeper North American integration and although the defunct SPP was not mentioned by name, many of its goals were front and center.

In a recent article Manuel Pérez-Rocha of the Institute for Policy Studies stated, “While Obama has written off the infamous, Bush-led Security and Prosperity Partnership (SPP) of North America, its main elements persist in today's bilateral relations. Some of the terminology has changed: the ‘smart border,’ for example, is now the ‘21st-century border.’ However, U.S. priorities continue to be deregulating trade, enforcing intellectual property rights, and guaranteeing ‘energy security in North America’ to meet the energy needs of the United States.” Manuel went on to say, “The United States has channeled more than $1.3 billion into security operations in Mexico. Although violence in Mexico continues to soar, claiming more than 23,000 lives since Calderón took office, the Obama administration continues to back Calderón's failed military strategy to curb drug trafficking.” Homeland Security Secretary Janet Napolitano recently admitted that the U.S. military has been working inside Mexico alongside Mexican armed forces in the battle against drug cartels. Under Obama, the Merida Initiative which has its roots in the SPP has continued and expanded cooperation in regards to common security threats.

Increasingly, Mexico’s drug war is being seen as a continental problem that requires continental solutions which is further pushing the NAFTA partnership into a common security front. This is escalating the militarization of the borders, integration in areas of law enforcement and the military, as well as advancing the development of a North American security perimeter. Some believe that a common security perimeter would be a more effective way of safeguarding North America while ensuring the free flow of trade, investment and labour. This would force Canada and Mexico to take on more U.S. security priorities and further place them at the mercy of American foreign policy. A continental security perimeter would be another incremental step in the creation of a North American Union.

Dana Gabriel is an activist and independent researcher. He writes about trade, globalization, sovereignty, security, as well as other issues. Contact: beyourownleader@hotmail.com Visit his blog at Be Your Own Leader
Posted by Dana Gabriel at 4:11 PM