Passing on the Mantle of Deep North American Integration 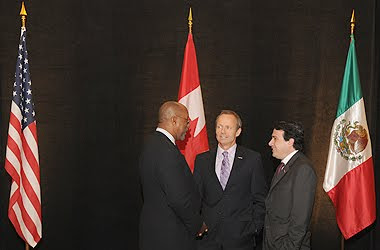 With the demise of the Security and Prosperity Partnership (SPP) of North America and the restructuring of many of its key priorities under the banner of the North American Leaders Summit, other trilateral initiatives are also passing on the mantle of deep continental integration.

The Fifth Annual North American Forum was held in Ottawa on October 4-6, 2009. In a news release the group describes itself as, “a community of Canadian, Mexican and American thought leaders whose purpose is to advance a shared vision of North America, and to contribute to improved relations among the three countries.” It goes on to say that, “They come together annually to explore linkages among the mutually reinforcing goals of security, prosperity and enhanced quality of life.” Meetings are co-chaired by former U.S. Secretary of State, George Schultz, former Premier of Alberta, Peter Lougheed, as well as former Mexican Finance Minister Pedro Aspe. The North American Forum has no business office and no business address. It consists of the three co-chairs, along with their extensive network of contacts in government, business and the military, meeting privately to champion North American integration. The news release also stated that, “This year’s meeting of the North American Forum focused on the need for Canada, Mexico and the United States to work together in responding to the global economic crisis and promoting a quick return to strong and sustainable growth. In addition, the Forum included special sessions on two critical issues: one on energy and the environment, and the other on transnational crime, arms smuggling and drug trafficking.” The North American Forum has been described as a parallel structure to the SPP.

The Standing Commission on North American Prosperity is an initiative of the U.S.-Mexico Chamber of Commerce and directly relates to the ongoing efforts to further merge North America. The group characterizes itself as “an united effort of distinguished individuals from Mexico, Canada and the USA to provide sound economic and social policy guidance to the political leaders of the three countries for the future prosperity of all peoples of North America.” It notes that, “In the aftermath of NAFTA and the SPP initiatives, a vacuum presently exists in developing a vision for North American prosperity. The lack of such a vision jeopardizes previous achievements in building strong economic ties across North America made during the past 15 years.” It also states that, “The Commission will meet 3 times a year and will provide ‘A North American Prosperity’ White paper to the leaders of the three countries upon conclusion of each session.” The group’s inaugural Summit was held at Georgia’s Kennesaw State University on May 12-13, 2009.

The Future of North America Summit presented by the Standing Commission on North American Prosperity was scheduled to take place on November 2-3 of this year in Toronto, Canada. It was reported that the Summit was cancelled, but there is no indication if it will take place at a later date. The meetings would have included the participation of past political heavyweights such as former Mexican President Vicente Fox, former U.S. President George H.W. Bush, former Canadian Prime Minister Jean Chrétien, as well as former Chilean President Ricardo Lagos Escobar. The agenda would have dealt with economic, environmental and climate change, energy, trade, transportation, along with other issues and how they relate to North America. In a recent article Manuel Pérez-Rocha, director of the NAFTA Plus and the SPP Advocacy Project, raised some valid questions concerning the meetings. He stated, “Are we going back to the future? Why are these former leaders ‘representing’ countries they don’t run any more? Is their purpose to dictate to our actual presidents what to do to build North America? Why was ex president Lagos from Chile invited at all?” What is clear is that with the SPP no longer the vehicle being used to create a North American Union, other groups and initiatives are further advancing deep continental integration.

The 2009 meeting of the NAFTA Free Trade Commission was held in Dallas, Texas on October 19 of this year and brought together top trade officials from the U.S., Canada and Mexico. The meeting was used as an opportunity to celebrate NAFTA’s achievements and to plot a course for the future. Manuel Pérez-Rocha stated, “What the three governments are really doing is incorporating the already-buried, George W. Bush-led Security and Prosperity Partnership (SPP) agenda into NAFTA. While current presidents are stripping the SPP label, which has garnered much negative publicity, they’re keeping its principles to armor NAFTA as an instrument for further deregulation.” He also said that, “the merging of the SPP prosperity agenda into NAFTA is evident, especially after the recent Dallas meeting. In their declaration, the trade officials stated that since 2007, the three countries have worked together to protect and enforce intellectual property rights. This was one of the SPP’s plans, together with a ‘framework for regulatory cooperation,’ a ‘North American plan for avian and pandemic influenza,’ and an ‘agreement for cooperation on energy science and technology,’ which are also well under way.” Mexico is scheduled to host the next NAFTA Commission meeting in 2010. Despite the demise of the SPP, many of its key objectives have already been implemented or continue to move forward through other initiatives.

Speaking at the annual policy forum of the Canadian American Business Council held in Montreal on October 21, U.S. ambassador to Canada David Jacobson said that there are no immediate plans to reopen NAFTA. He also echoed Washington’s sentiments that the trade agreement is working well for all sides. This could not be further from the truth as NAFTA is badly flawed. Minus a few cosmetic changes that the Obama administration might make regarding side deals related to labor and the environment, the reality is that NAFTA will remain intact. The NAFTA structure is also being used to advance SPP objectives. All the talk of renegotiating the agreement appears to have revived the 15 year old trade accord and renewed the push for North American integration. This could lead to NAFTA’s expansion into a North American Union and might serve to further spread its failed model to other parts of the Western Hemisphere.

Dana Gabriel is an activist and independent researcher. He writes about trade, globalization, sovereignty, as well as other issues. Contact: beyourownleader@hotmail.com
Posted by Dana Gabriel at 4:29 AM