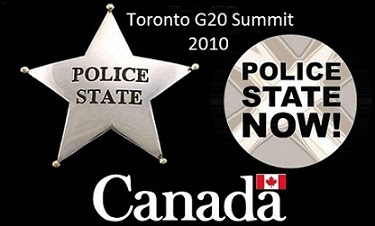 Security for the upcoming G20 summit will be the responsibility of the Integrated Security Unit, “comprised of the RCMP, the OPP (in the G8 context), the Canadian Forces, Toronto Police Service, Peel Regional Police and other law enforcement and security experts who will work collaboratively.” Ed Boltuc, a member of the G20 planning team for the Toronto Police Service stated, “The Olympics that you saw recently in Vancouver was actually the largest security event ever to take place here in Canada. The G20/G8 surpasses that completely.” He went on to say, “There’s going to be a massive — absolutely massive — presence of police and security on the ground like you’ve never seen before.” The Globe and Mail reported that as many as 10,000 uniformed officers, along with a 1,000 private security guards will be deployed together with an unspecified number of Canadian soldiers. Foreign dignitaries attending the meetings will also have their own security detail. The federal government security costs are expected to top $179 million.

As part of the operation, a two fenced security perimeter will encircle the Metro Convention Centre and nearby hotels where delegates will be staying. The RCMP are entrusted with protecting the inner security zone which will be controlled by a 3-metre-high unscalable fence, as well as five levels of security screening. Toronto police will be in charge of the outer zone and will deal with any protests beyond the perimeter. Canadian Forces responsibilities involve, “large-scale operational planning, land and air surveillance, underwater safety and security for the venues and some logistic and ceremonial functions. Support also includes drawing on the CF’s ongoing partnership in the North American Aerospace Defence Command (NORAD).” Heightened security will begin two weeks before the summit. In order to gain access to the outer security zone, residents and workers will need to be registered or accredited. Designated free speech zones will also be put in place for demonstrators. Toronto Police have announced that they will be using an old movie studio as a temporary jail to house unruly protesters during the event.

The G8/G20 summits have become a platform for protests on issues such as social justice, anti-globalization and the environment. A government website section entitled Information for Demonstrators points out that freedoms of opinion, expression and peaceful assembly guaranteed under the Canadian Charter of Rights and Freedoms are not limitless. The Criminal Code of Canada contains provisions that limit certain activities including blocking or obstructing a highway, causing a disturbance, mischief, riots, unlawful assembly, breach of the peace and others. Some of these laws could be subjectively enforced and just as government grants you rights, they can just as easily take them away. Most protesters will probably remain peaceful, but some groups and individuals might have different ideas. In the past, police have been caught using provocateurs at rallies and activists need to be mindful of those who may attempt to infiltrate their ranks and engage in unlawful behaviour. Council of Canadians spokesman Dylan Penner wants the government to promise it will not use agents provocateurs like it did at North American Leaders Summit in Montebello, Quebec, back in 2007. In advance of G20 summit, some Toronto activists have been subjected to harassment and intimidation by police. Similar tactics were also employed in Vancouver before the Olympics.

People in Toronto are already getting a taste of what to expect during the G20 summit. A recent training exercise simulated a hostage taking in the concourse level of Commerce Court, in the downtown core of the city. The operation was comprised of Toronto Police Emergency Task Force, along with private security personnel. The joint exercise was designed to train police and security guards on how to communicate through a shared radio system. During the G20 summit, private security will play an important role in crowd control and emergency response. This is part of the continued merging of the public and private security sectors. Another training exercise involved two military helicopters flying around the Metro Toronto Convention Centre and then landing in front of the CN Tower. This was to test the capability of the landing area and practice transporting delegates to the venues site. These various security drills are intended to check coordinated responses and ultimately to confirm readiness for the summit. They are also used to further acclimate increased police and military presence.

More than anything, it is protests and the threat of terrorism which are used to justify these huge security operations. The deployment of the military alongside police is increasing with their roles seemingly interchangeable. Police tactics and training have become more militarized. New weapons and technology first developed for the military are often being incorporated into police departments. At last year’s G20 summit in Pittsburgh, the LRAD which is capable of emitting painfully loud blasts of sound was turned against protesters. This illustrates a more aggressive approach in trying to control public dissent. Events such as the G20 have become a testing ground for new police state measures and a trial run for a military style occupation. In June, downtown Toronto will essentially be on lockdown with rights and liberties severely restricted.

Dana Gabriel is an activist and independent researcher. He writes about trade, globalization, sovereignty, as well as other issues. Contact: beyourownleader@hotmail.com
Posted by Dana Gabriel at 1:24 PM