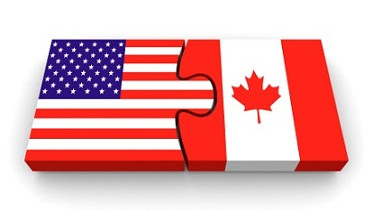 The Department of Homeland Security and Canada Border Services Agency recently announced the Phase I pilot of the Entry/Exit program which is part of the Beyond the Border Action Plan. It will include collecting and exchanging biographic information of third-country nationals, permanent residents of Canada, and lawful permanent residents of the U.S. at four selected land border ports of entry. A fact sheet stressed how this, “is an important step as both countries move towards a coordinated entry/exit system that will strengthen border and immigration programs, support law enforcement, and accelerate the legitimate flow of people and goods into Canada and the United States and across our common border.” The Canadian government is also advancing plans to use biometrics for immigration and border security that would bring them in line with the U.S. and other countries. The perimeter security agreement called for implementing, “systematic and automated biographic information-sharing capability by 2013 and biometric information-sharing capability by 2014.” A North American biometric identification system could be used to restrict, track and trace our movements.

On October 4, Transportation Security Administration (TSA) and Transport Canada officials announced the extension of the expedited screening initiative, TSA Pre✓™ which will now include lanes for Canadian NEXUS members at 27 participating U.S. airports. Canadian Minister of State For Transport Steven Fletcher explained that, “The Government of Canada and the United States are delivering on commitments to include Canadian NEXUS members in designated TSA Pre✓™ lanes as part of the Beyond the Border Action Plan.” He went on to say, “This will mean smarter and faster air travel for Canadian NEXUS members traveling within the U.S., while maintaining a high level of aviation security.” TSA Administrator John Pistole acknowledged that, “The inclusion of Canadian NEXUS members in TSA Pre✓™ is an important step in further harmonizing the security screening process between the U.S. and Canada.” Under NEXUS, pre-screened travelers are granted expedited access across the border, by air, land or sea. As part of the perimeter security deal, both countries are expanding and integrating trusted traveler programs.

The Next-Generation pilot project which would permit U.S. agents on Canadian soil is on hold while legal issues are being resolved. The security perimeter agreement stated that both countries would, “create integrated teams in areas such as intelligence and criminal investigations, and an intelligence-led uniformed presence between ports of entry.” The plan which is a land-based version of the Shiprider program was scheduled to be deployed this summer. Allowing U.S. agents to cross the border and pursue suspects into Canada poses a threat to sovereignty and could infringe on personal privacy laws. The pilot project is part of the process of acclimating U.S. policing activities in Canada and could later be expanded.

Last month, the USDA's Food Safety and Inspection Service and the Canadian Food Inspection Agency established a pre-clearance initiative pilot project on import re-inspection activities for fresh meat. This is tied to the Beyond the Border deal and is aimed at streamlining meat inspections at the U.S.-Canada border. Just as the joint program was being rolled out, XL Foods in Alberta, Canada announced a massive recall of meat products due to E. coli contamination. This came on the heels of a letter from the Safe Food Coalition to the USDA citing concerns that food safety could be compromised and requesting that the border inspection pilot be halted. Some of the potential tainted meat could have been shipped to at least eight U.S. states. In a press statement, the Executive Director of Food & Water Watch, Wenonah Hauter pointed out that, “the Obama Administration and the Harper Government in Canada have been plotting to eliminate the very border inspection program that tipped off authorities that there was a major problem brewing with the products originating from the XL plant.” Plans to further deregulate food safety inspections could lead to more trouble in the future.

In September, Transport Canada and the United States Coast Guard launched a pilot project that will include joint Port State Control inspections of non-Canadian and non-U.S. flagged vessels in the Great Lakes St. Lawrence Seaway. Rear Adm. Mike Parks, Commander of the U.S. Coast Guard Ninth District described how, “This initiative is in keeping with President Obama's and Prime Minister Harper's Beyond the Border Perimeter Security Initiative protecting the Great Lakes and St. Lawrence Seaway region, which provides common access to the heart of North America. Our goal is to make vessel inspections more efficient and facilitate American and Canadian business on both sides of our shared border.” The program is outlined in the Regulatory Cooperation Council Joint Action Plan and establishes a, “safety and security framework for the Great Lakes St. Lawrence Seaway that will align the two countries’ regulatory requirements. This pilot project will look for efficiencies in order to reduce duplicate inspections and impediments to trade.” When completed, recommendations will be made on whether to form a permanent binational foreign vessel inspection program.

NAFTA partners, in conjunction with multinational corporations and influential think tanks are pushing for deeper North American integration. As far as the upcoming U.S. election goes, Barack Obama and Mitt Romney are both committed globalists and have no intentions of upholding the constitution or protecting what is left of American sovereignty. The notion of real choice is now even more of an illusion. Minus the Democrat and Republican rhetoric, it’s essentially the same policies, same agenda, and the same team. It doesn’t matter who wins the presidency, the path towards a North American Union will continue.