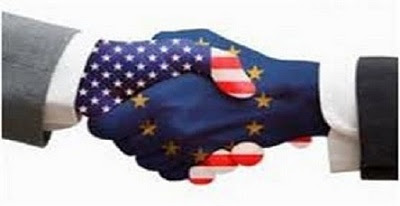 According to a recent Reuters article, “Europe and the United States are set to launch trade talks early next year to deepen the world’s largest trading relationship.” It goes on to say that, “An expert group co-chaired by EU Trade Commissioner Karel De Gucht and U.S. Trade Representative Ron Kirk will in December issue a report recommending pursuing talks.” An EU official explained that, “The report will recommend the negotiation of a comprehensive agreement between the United States and the European Union.” Last week, the European Parliament also approved a resolution calling for talks on a possible trade deal with the U.S. to begin in 2013. The U.S. and EU have already made incremental strides with regards to economic integration. With renewed political support, momentum for a transatlantic trade accord is building.

In 2007, U.S. President George W. Bush and German Chancellor Angela Merkel established the Transatlantic Economic Council (TEC) to help eliminate trade barriers and harmonize standards. The move was seen as a step towards creating a single transatlantic market. Throughout the years, the TEC has advanced deep U.S.-EU integration. It has helped align policies in areas of investment, accounting, import safety, supply chain security, automobile standards, renewable energy, as well as others. The TEC continues to guide and stimulate transatlantic economic convergence.

At the U.S.-EU Summit in November 2011, leaders from both sides directed the TEC to create a High Level Working Group on Jobs and Growth. This was viewed as another step forward to an eventual free trade deal. The Working Group was tasked with identifying, “policies and measures to increase U.S.-EU trade and investment to support mutually beneficial job creation, economic growth, and international competitiveness.” It was entrusted with examining options in areas of, “Conventional barriers to trade in goods, such as tariffs and tariff-rate quotas; Reduction, elimination, or prevention of barriers to trade in goods, services, and investment; Opportunities for enhancing the compatibility of regulations and standards; Reduction, elimination, or prevention of unnecessary ‘behind the border’ non-tariff barriers to trade in all categories; Enhanced cooperation for the development of rules and principles on global issues of common concern and also for the achievement of shared economic goals relating to third countries.” A U.S.-EU trade agreement could serve as a model for the rest of the world, setting common standards on regulations, tariffs and investment rules.

In June, the U.S.-EU High Level Working Group on Jobs and Growth issued an interim report which endorsed beginning talks on a comprehensive trade deal. It outlined categories that a potential agreement should include such as tariffs, non-tariff barriers, regulatory issues, services, investment, procurement, intellectual property rights and rules. A Joint U.S.-EU Statement urged, “the Group to complete its work as quickly as possible, including consultations with public and private stakeholders, in accordance with the respective processes of both sides, with the goal of reaching a recommendation to Leaders later this year on a decision as to the negotiations.” At a press conference following the G20 Summit in Mexico, President Barack Obama also acknowledged that, “the United States and the European Union agreed to take the next step in our work towards the possible launching of negotiations on an agreement to strengthen our already very deep trade and investment partnership.” An official announcement is expected sometime after the U.S. election and if trade talks begin early next year, a deal could be signed before the end of 2014.

The U.S.-EU partnership remains the foundation for an international economic order. Regardless of whether Barack Obama or Mitt Romney wins the upcoming election, it appears as if U.S.-EU trade negotiations will become a priority. More globalization is not the solution to our financial woes. Such an agreement would serve to further erode U.S. sovereignty and economic freedom. If you factor in that the EU already has a trade deal with Mexico and is close to signing one with Canada, combined with a future agreement with the U.S., you then have the basis for a NAFTA-EU free trade zone. This would be an important step in advancing the goal of creating a Transatlantic Union.