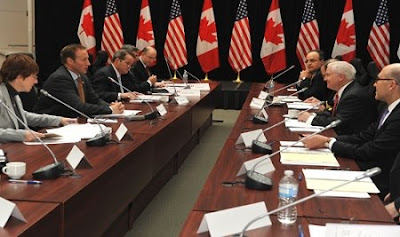 A recent North American defense ministers meeting was originally scheduled to be a trilateral gathering, but Mexico’s Secretary of Defense was unable to participate in the summit. Canada-U.S. talks focused on continental, hemispheric, as well as global defense issues. The meeting went a long way to further deepen bilateral security and military ties. It was also significant considering that Canada and the U.S. are currently negotiating an agreement that would work towards establishing a perimeter approach to security.

On January 27, Canadian Minister of National Defense Peter MacKay hosted a bilateral meeting with his American counterpart U.S. Secretary of Defense Robert Gates, which centered on security issues of common interest. MacKay characterized the bilateral talks as an opportunity to, “build a better understanding of the threats facing our countries, as well as discuss the most effective ways to address them.” He added, “Our objective is simple: we will work to build on our defence and security cooperation with coordinated and sustained action.” Gates and MacKay addressed security issues facing Mexico and Central America. They discussed expanding cooperation in the Arctic, along with efforts to counter piracy, narcotics and human-trafficking. Also on the agenda was Afghanistan. Canada was set to pull its troops out in July of this year, but now its mission has been extended. It will transition from a combat role to training members of the Afghan military and police forces until 2014. In the coming years, Canada could be asked to play a bigger role in the war on terrorism, including participation in any future U.S.-NATO military operations.

At a Joint Press Conference the Canadian and U.S. defense chiefs further elaborated on what was discussed during their meeting. Minister Mackay emphasized that the talks, “were successful in strengthening and expanding the already strong defense relationship that exists between our two countries and in improving our bilateral coordination to effectively address threats to our common security.” He went on to say, “we discussed our bilateral efforts through NORAD as well as new challenges facing our defense and security institutions such as maritime domain awareness which now falls under NORAD, and ways to make our maritime approaches safer and cyber threats.” MacKay acknowledged, “What Secretary Gates and I discussed today will deepen the unique partnership between our countries on important defense issues and ultimately increase security for our citizens and our coordinated contributions to global security.” Although it was not specifically mentioned, the talks would have provided a perfect opportunity to address any military aspects associated with the proposed security perimeter agreement.

In a statement following the bilateral meeting, Secretary Gates announced that, “Moving forward, we’ll examine together how the advanced defenses of our military networks might also be applied to protect critical civilian infrastructure.” In July of 2010, Public Safety Minister Vic Toews and U.S. Department of Homeland Security Secretary Janet Napolitano, reached an agreement to safeguard and respond to disruptions of shared infrastructure that connect the two nations. The Canada-U.S. Action Plan for Critical Infrastructure is designed to, “strengthen the safety, security and resiliency of Canada and the United States by establishing a comprehensive cross-border approach to critical infrastructure resilience.” This includes building partnerships, improved information sharing, as well as risk management aimed at increasing the ability to prepare for emergencies, such as a natural disaster and a terrorist or cyber attack. The action plan is part of ongoing cross-border collaboration and appears to be linked to the Civil Assistance Plan signed by the Canadian-U.S. military in 2008, which allows the armed forces of one nation to support the other during an emergency.

During the news conference, questions also turned to the F-35 Joint Strike Fighter program and concerns over rising costs, along with other production problems which prompted both Gates and MacKay to defend the project. Secretary Gates explained, “having all of our partners continue to be with us in this program is very important, and I'm pleased at the number of our allies who are going forward with the F-35.” Canada has announced plans to purchase 65 F-35 fighter jets at a price tag of $16 billion. Both the opposition Liberal party and the NDP have been critical of the deal, but the Conservative government maintains that any changes to their decision to buy the fighter jets would put the future of Canada’s air force at risk. Some have warned that the acquisition could trigger an Arctic arms race. The decision to purchase the new stealth F-35’s reaffirms Canada’s commitment to NORAD and NATO. It is also closely tied to deeper Canada-U.S. military integration and plans for a North American security perimeter.

There are reports that the signing of a security perimeter agreement between Canada-U.S. has now been delayed. When news leaked late last year of an imminent trade and security deal between the two countries, it caused an uproar in Canada. At first, the Conservative government denied any such claims, but later they admitted that negotiations are taking place. With speculation of a possible federal election in the spring, it would make sense to wait for such an announcement. This could avoid any sovereignty concerns becoming an issue during the campaign. If an election is called and the Conservatives do win and are able to secure a majority government, they could also proclaim that they have a mandate to pursue a perimeter security deal. In December of last year, Prime Minister Stephen Harper acknowledged in the House of Commons that, “Canada already operates under what is called the Security and Prosperity Partnership (SPP) with the United States and Mexico.” This is further proof that the SPP never truly died. A perimeter approach to continental security is a continuation of the SPP agenda and will serve to expand the Canada-U.S. relationship in the confines of Fortress North America.

In a speech from 2008, former Assistant Secretary of State Thomas Shannon spoke on the evolution of NAFTA and how the SPP process, “understands North America as a shared economic space and that as a shared economic space we need to protect it, and that we need to understand that we don’t protect this economic space only at our frontiers, that it has to be protected more broadly throughout North America. And as we have worked through the Security and Prosperity Partnership to improve our commercial and trading relationship, we have also worked to improve our security cooperation. To a certain extent, we’re armoring NAFTA.” For those championing for deeper Canada-U.S. integration a North American security perimeter is seen as a logical next step. There now appears to be a renewed push to take NAFTA and the SPP design to the next level and incrementally closer to a North American Union.

Related articles by Dana Gabriel
North American Integration Back on the Front Burner‏‏
Towards a North American Security Perimeter
Expanding U.S.-Canada Security and Economic Partnership
Strengthening NAFTA Ties and the Push Towards a Common Security Front

Dana Gabriel is an activist and independent researcher. He writes about trade, globalization, sovereignty, security, as well as other issues. Contact: beyourownleader@hotmail.com Visit his blog at Be Your Own Leader
Posted by Dana Gabriel at 6:06 PM