UN Treaties Fail to Respect American Sovereignty and the Constitution 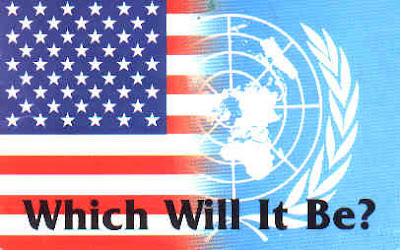 Much of the United Nations philosophy manifested through its charter and numerous organizations, as well as international treaties, fails to respect American sovereignty. In many cases, it runs contrary to the Constitution. Incrementally, the UN is gaining more power. The recent swine flu pandemic scare demonstrates the influence that it has over American domestic policy.

A Gallup Poll conducted from February 9-12 of this year, found that 65% of Americans believe that the UN is doing a poor job. Under his tenure as Secretary-General, Kofi Annan was blamed for many of the UN’s problems and failures. Unfortunately, under the leadership of Ban Ki-moon, nothing has changed. He did promise reforms with a new era of transparency, accountability and better governance. The UN cannot be truly reformed as it is rotten to its very core. It is a bureaucratic nightmare, a cesspool of waste, mismanagement and corruption. More importantly is the danger it poses to American sovereignty.

No one in government has been more consistent in their position regarding the UN and its continued threat to American sovereignty than Congressman Ron Paul. On February 24, he reintroduced H.R. 1146, the American Sovereignty Restoration Act. If passed, it would effectively pull the U.S. out of the UN. Membership in the UN only serves to undermine American sovereignty. The UN is guilty of dictating environmental, labor, trade, gun and health laws. Through its system of international treaties, the U.S. finds itself increasingly bound by UN agreements.

An Obama presidency is seen by many as an opportunity for the U.S. to ratify the United Nations Convention on the Rights of the Child (UNCRC) and the Law of the Sea Treaty. Both would further challenge American sovereignty. The UNCRC would weaken parental authority and is an example of the UN setting U.S. social policy. Home school advocate Michael Farris reported that in an attempt to secure a seat on the UN Human Rights Council, the Obama administration has further pledged their support and loyalty to the UN. Obama is a globalist at heart. He is no different than some past presidents who have also failed to uphold the Constitution and have surrendered more sovereignty to the UN.

In 2005, President Bush placed the U.S. under UN law in the advent of a health emergency involving the avian flu or a pandemic influenza. From the beginning of the swine flu outbreak, the UN, through the World Health Organization (WHO), was hyping things up. The WHO was saying that the world was on the verge of a deadly pandemic that would require global solidarity. In Mexico where the flu first broke out, the alert has now been lowered and things are returning back to normal. If things were really as bad as some had suggested, why wasn’t the U.S.- Mexico border closed? The WHO is still warning that the virus could mutate and return as a more lethal strain in the coming months. As a result of the fear mongering over the swine flu, drug companies and manufacturers stand to profit. The hysteria served to scare the population and further ratchet up the police state. It could have been a trial balloon for a future martial law scenario and a UN global takeover.

Make no mistake about it, the United Nations is the mechanism for world government. At every turn, it seeks to undermine American sovereignty and override its domestic laws. National sovereignty remains the greatest obstacle to world government. Ron Paul sums it up like this, “The choice is very clear: we either follow the Constitution or submit to UN global governance. American national sovereignty cannot survive if we allow our domestic laws to be crafted by an international body. This needs to be stated publicly more often. If we continue down the UN path, America as we know it will cease to exist.”

Dana Gabriel is an activist and independent researcher. He writes about trade, globalization, sovereignty, as well as other issues.
Contact: beyourownleader@hotmail.com
Posted by Dana Gabriel at 10:45 AM