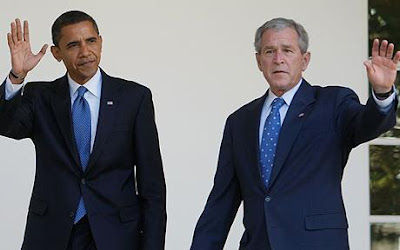 When it comes to further advancing free trade initiatives, it really makes no difference which party controls, congress or the presidency. Democratic President Bill Clinton signed the North American Free Trade Agreement (NAFTA) and Republican President George W. Bush did likewise with the Central American Free Trade Agreement (CAFTA). Any U.S. trade deal that has been negotiated and signed since NAFTA is based on that failed model. President Barack Obama voted against CAFTA when he was a senator and has come out against the U.S.-Colombia Free Trade Agreement (FTA). He has promised to renegotiate NAFTA which could be used to jump-start the Security and Prosperity Partnership (SPP) and plans for a North American Union. It could also serve to further spread the NAFTA model to the hemisphere.

Out of the ashes of the failed Free Trade Area of the Americas (FTAA) came CAFTA. It expanded NAFTA’s free trade zone to El Salvador, Honduras, Nicaragua, Guatemala, Costa Rica and the Dominican Republic. Bush signed the agreement into law on August 2, 2005, after it had passed the House of Representatives under very questionable circumstances. It was hailed as a milestone for trade initiatives in the Americas and as an opportunity to create new jobs and open new markets for American products. CAFTA, like other free trade agreements, has failed to deliver on the promise of prosperity and has served to further benefit multinational corporations. It has been a rough ride and on January 1, 2009, Costa Rica became the last member country to enter into the agreement. This was not before they had to make some changes, including privatization of certain parts of their economy. Free Trade deals such as NAFTA and CAFTA, have been used to lock member countries into a framework that further favors investor rights and protections.


Much like NAFTA, CAFTA also granted corporations and foreign investors a new set of rights and privileges whereby they can sue member nations, if they feel their profits have been restricted. In December of 2008, Pacific Rim Mining Corp. threatened to sue the government of El Salvador under CAFTA, and filed a notice of intent. The company claims that despite compliance with current laws in place, they have been denied permits to begin mining silver and gold. Pacific Rim says that they have invested some $75 million and could be seeking up to $200 million in monetary damages and potential lost profits. Some scientists, along with citizen and environmental groups, have warned that the project poses a serious threat to local water supplies. This comes in the midst of governmental debates in El Salvador, pertaining to new mining laws. If the dispute is not resolved by March 9, 2009, Pacific Rim will be able to begin arbitration hearings. CAFTA includes a dispute-resolution mechanism similar to NAFTA’s chapter 11. Trade deals have been used to smuggle through a new set of transnational corporate rights. As a result, foreign investors and corporations have been given the power to challenge and even overturn labour, health, and environmental laws.

Obama has promised to renegotiate NAFTA in order to strengthen labour and environmental provisions. There are many who want him to do the same with CAFTA. In an article he wrote entitled ‘Why I Oppose CAFTA’ he stated, “Globalization is not someone’s political agenda. It is a technological revolution that is fundamentally changing the world’s economy, producing winners and losers along the way. The question is not whether we can stop it, but how we respond to it.” Does this mean we should just accept and embrace it? Try and tell that to the millions around the world who live in poverty and are resisting globalization. Ron Paul, who ran as a Republican presidential candidate, advocated real change which sparked an organic grassroots movement. He commented, “CAFTA was driven by politics and nothing more. Multinational corporations and political globalists share the same goals, namely the centralization of political power in international bodies and the diminution of national sovereignty.” In hopes of maybe trying to resurrect a revised version of the FTAA, Bush launched the ‘Pathways to Prosperity in the Americas’ initiative in September of 2008. It is modeled after the SPP and the U.S.-EU Transatlantic Economic Council. NAFTA and the SPP are precursors to a North American Union. Combined with CAFTA and other bilateral and regional deals, it could facilitate a larger multilateral agreement. What does an Obama presidency mean for the pending U.S.-Colombia FTA?

Even before taking the oath of office, there was already pressure for Obama to use his influence to get the U.S.-Colombia FTA passed. Recently, Secretary of State Hillary Clinton announced that Obama will continue to support Plan Colombia, but she said it did require some adjustments. Plan Colombia is part of the disastrous war on drugs. It was launched by the Clinton administration and has failed to reduce the flow of illegal drugs into the U.S. and has led to more violence and corruption in Colombia. With Obama further committing to this initiative, I believe that it holds well for the U.S.-Colombia FTA. He could get assurances from the Colombian government to better uphold human rights, and curb violence being perpetrated against labour leaders. After a few concessions are made to the agreement, Obama could give it his stamp of approval. The Democrats could then claim victory for the Colombian people and labour movements around the world. This would demonstrate Obama’s willingness to honor labour and human rights standards. With the current global economic crisis, many believe that the U.S. ratifying this trade agreement, would send a positive message to the rest of the world. It is a direct result of our monetary policies, government managed free trade agreements, and globalization, that we find ourselves in such economic dire straits.

Obama does have a clear advantage of preceding one of the most unpopular presidents in American history. In many ways, Bush is meant to take the fall and have everything blamed on him. His failures will be used as a steppingstone for the new administration. The global elite have passed the baton to Obama and he will carry on with open borders, amnesty, free trade, a North American Union agenda and the push towards world governance. He will be able to accomplish things that Bush and past presidents initiated, but were unable to complete. Many have been trapped in the whole fake left-right paradigm, designed to divide and conquer and neutralize any true opposition. With Obama, the propaganda masters have done a magnificent job mass marketing and packaging him for the masses. His popularity and cult-like worship seems to even transcend party lines. Unfortunately, just like Bush, he has no intentions of upholding the constitution or protecting American sovereignty. Expectations have been set high and Obama will be able to get by on charisma and rhetoric for only so long. We need to judge our leaders not by their words or promises, but by their actions.

Dana Gabriel is an activist and independent researcher. He writes about trade, globalization, sovereignty, as well as other issues.
Contact: beyourownleader@hotmail.com
Posted by Dana Gabriel at 9:23 AM