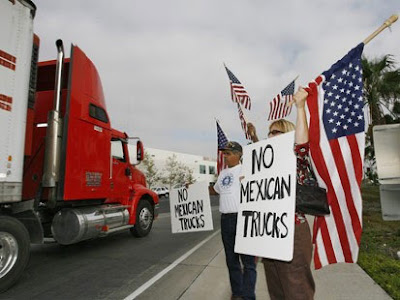 Allowing Mexican long-haul trucks full access inside the U.S. is a component of NAFTA. Safety and security issues have proven to be a huge stumbling block in achieving this objective of the agreement. Under the Bush administration, a cross-border trucking program was established, giving a limited number of Mexican trucks full access beyond the commercial zone restrictions. Several past attempts to shut down the program have failed, but it appears as if the House Democrat fiscal 2009 spending bill, could finally put a stop to it. Ending the program could strain relations with Mexico and spark some sort of trade retaliation. There are reports that the Obama administration may try to implement their own program in order to better respect NAFTA obligations.

The pilot trucking program began in September 2007, as a result of a successful challenge which found the U.S. in violation of NAFTA. Under the program, a limited number of Mexican carriers are permitted full access to U.S roads. It also allows for an equal number of U.S. trucks to operate in the same capacity in Mexico. Despite previous efforts to cut funding, the Bush administration was able to continue the program by using funds from other parts of the transportation budget. As part of the Fiscal Year 2009 Omnibus Appropriations Bill, all funding would be terminated, using very clear and strong language which could not be misinterpreted. The U.S. Department of Transportation has stated that they would not make any attempts to save the program.


There is speculation that canceling the cross-border trucking program could set the tables for a showdown between the Obama administration and the Mexican government. Allowing Mexican long-haul trucks full access inside the U.S. is a NAFTA commitment and the pilot program is seen as a step in fulfilling this provision of the agreement. If the U.S. fails to comply, it is possible that Mexico could retaliate by placing or raising tariffs on some U.S. goods. Mexico’s ambassador to the U.S., Arturo Sarukhan, has stated that if the program is defeated by congress, that all options would be open, including possible retaliation. He stressed that ending the program has nothing to do with safety and security, but is rather a protectionist move. He also warned that keeping Mexican trucks off U.S. roads would raise the cost of goods for consumers and producers. Ending the pilot trucking program could hurt U.S.-Mexico relations and affect NAFTA.

Since its inception, there have been concerns whether the pilot trucking program would meet all U.S. safety regulations and just how they would be enforced. Mexico lacks any effective safety standards for its drivers or trucks. There is also no accurate drug or alcohol policy in place and it is without a reliable national criminal or driving database. Unions, as well as some safety and consumer groups, oppose the cross-border trucking program, citing safety, security and environmental concerns. The Teamsters Union, along with Public Citizen and the Sierra Club, have filed a suit to stop the program, in an attempt to close the border to Mexican trucks.

Some are calling on the Obama administration to block any move to end the cross-border trucking program and instead take action to make it permanent. Proponents argue that Mexican long-haul trucks have been unfairly denied full access inside the U.S., not because of safety and security concerns, but as a result of union pressures to prevent competition. They contend that protectionist measures have hindered American trucking companies from reaping the benefits of gaining full access into Mexico. They are also warning that ending the pilot program would raise the price of consumer goods. There are accusations that the Democrat-controlled congress is further shilling to unions and that the move to end the trucking program is a means of rewarding them.

The cross-border trucking program is part of NAFTA and the corporate North American Union agenda of further erasing continental borders. If it becomes permanent and is expanded, it could lower wages and lead to more American job losses. There is also the potential that it could destroy small and medium sized independent trucking companies. Allowing Mexican trucks full access inside the U.S. is a safety issue, as well as a security threat which could increase drug and human smuggling. Republican Congressman, Ron Paul, had this to say about the pilot trucking program when it was first announced. “Rather than securing our borders, we seem to be providing more pores for illegal aliens, drug dealers, and terrorists to permeate.” In light of the growing drug cartel violence in Mexico, further securing the border should be a national security priority.

Dana Gabriel is an activist and independent researcher. He writes about trade, globalization, sovereignty, as well as other issues.
Contact: beyourownleader@hotmail.com
Posted by Dana Gabriel at 10:26 AM