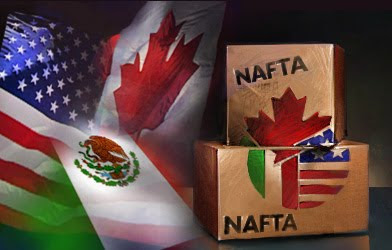 A recent binational poll commissioned by the Council of Canadians, found that the majority of Americans and Canadians oppose provisions found in Chapter 11 of NAFTA. The poll found that 70% believe that energy corporations should not be allowed to sue governments for changes to policy that protect the environment and promote the public interest. Over half of the complaints filed under Chapter 11 of the agreement, have challenged environmental policies. Past polls have indicated that the majority also reject the Security and Prosperity Partnership (SPP) and deeper integration into a North American Union. Continental integration is being achieved on many different levels and this includes through environmental commitments.

Chapter 11 of NAFTA grants foreign investors the right to sue member nations, if they feel that their profits have been restricted. Corporations have used this new power to challenge and even overturn labour, health and environmental laws. This new poll demonstrates that there is a desire for significant changes to be made to NAFTA. President Barack Obama has promised to renegotiate labour and environmental provisions under the agreement. Chapter 11 severely undermines our sovereignty. In many cases it is not being used to defend trade, but rather to challenge and override domestic laws.


When an investor files a suit under Chapter 11 of NAFTA, it does not mean that they will win. Increasingly, it is being used to intimidate and threaten governments who in many instances wish to avoid arbitration. In August of 2008, Dow Agrosciences served a notice of intent under Chapter 11. This was due to the province of Quebec’s decision to ban the sale, as well as certain uses of lawn pesticides containing the company’s active ingredient 2,4-D. Many support the ban and this includes medical and environmental officials. The province of Ontario is also working on a similar measure. Perhaps feeling that their case might be weak, Dow has not proceeded any further. They also might be waiting for several long standing cases to be settled that could set new precedents. Many feel that more stringent standards should be imposed by provincial health regulators. Chapter 11 undermines the decision making process of democratically elected governments. Through the SPP, pesticide regulations are being harmonized and as a result, Canada has lowered its standards.

North American integration is being accomplished through trinational environmental commitments. In June of 2008, the Commission for Environmental Cooperation (CEC) was established to assist in coordinating environmental policies and it is closely tied to NAFTA. It is also being used to implement elements of the North American Agreement on Environmental Cooperation. The CEC is working in conjunction with the governments of Mexico, the U.S., and Canada, setting up a continental strategy to identify environmental concerns. This could be used to further bind the three countries together, using the environment as the pretext. It is also another example of putting more power in the hands of unelected and unaccountable bureaucrats and organizations. Unfortunately, many solutions being offered to combat environmental issues are in the form of more taxes and more governmental control over our lives.

Canada does not have a national carbon cap-and-trade system in place, but some provinces have begun working on a shared market. There is a push to create a North American integrated carbon market. Recently, the European Union proposed a global system for trading carbon credits. They are urging developed nations to sign on, in an effort to curb greenhouse gas emissions. Such a global tax would definitely generate billions of dollars, but it would also be a financial burden for many. My fear is that any global solution could very well be at the expense of our freedoms and sovereignty.

NAFTA best serves corporate interests and does not represent true free trade. You know something is drastically wrong when Chapter 11 of the agreement essentially grants corporations more rights than national citizens. It might be popular to blame trade deals for all our economic woes, but they are only one part of our failed economic system. Congressman Ron Paul, who also ran as a Republican presidential candidate, explained it like this. “Free trade is not complicated, yet NAFTA and CAFTA are comprised of thousands of pages of complicated legal jargon. All free trade really needs is two words: Low tariffs. Free Trade does not require coordination with another government to benefit citizens here.” Could it really be that simple? Forget about renegotiating NAFTA. The time has come to scrap the trade accord in its entirety!

Dana Gabriel is an activist and independent researcher. He writes about trade, globalization, sovereignty, as well as other issues.
Contact: beyourownleader@hotmail.com
Posted by Dana Gabriel at 9:45 AM