The IMF: Raping The World, One Poor Nation at a Time 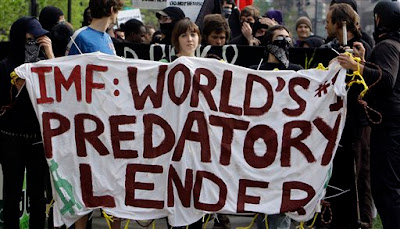 The International Monetary Fund (IMF) has been described as one of the enforcers of globalization. Nations who receive IMF assistance are often forced to surrender more sovereignty and further open up their borders to international banks and multinational corporations. Much of their wealth is then sucked dry by foreign predators with its resources and population essentially becoming the collateral for such financial aid. As a result of the global economic crisis, many more nations are having to turn to the IMF for help. At the recent G-20 Summit in London, the IMF’s role was expanded and its powers enhanced. There was little mention of its failed policies and its less then stellar record of effectively promoting development and democracy around the world. While some talk of reform, the IMF continues to rape the world, one poor nation at a time.

The IMF, along with the World Bank were established as financial sister institutions with both originating out of the 1944 Bretton Woods Agreement. They are part of the United Nations system. The IMF was designed to help stabilize the post-World War II international financial system and is the framework for a central bank of issue. It provides short term financial assistance to nations that qualify, but this is at a very high price. These countries are placed in an economic straitjacket with the IMF and World Bank working in tandem, dictating large portions of public policy.


Some IMF conditions that countries have been forced to comply with can only be described as harsh and undemocratic. Often the devaluation of a nation’s currency has been a precondition for IMF assistance. In order to qualify for IMF loans, some nations have also been forced to lower tariffs, restrict governmental subsidies and spending, balance budgets, as well as sell-off state institutions to foreign interests. In some cases, the IMF has even prohibited wage increases as some countries have tried to do so, in order to compensate for a sharp rise in food prices and other commodities. Environmental and labor rights have also taken a hit as a result of IMF policies. Under the guise of helping economic distraught countries, the IMF is really bailing out foreign investors and multinational corporations. They have further fueled chaos and instability in some of the poorest regions in the world.

At the recent G-20 Summit, leaders pledged to boost the IMF’s financial resources to $750 billion. It will also assume a more central role in monitoring and regulating global markets, playing a key role in the design of a new financial system. The IMF’s power to create money has been activated and they will be able to issue up to $250 billion of new Special Drawing Rights (SDRs). Some countries are calling on SDRs to be used as a full reserve currency to challenge the dollar. In a recent article that appeared in the New American , William F. Jasper writes, “If the IMF is empowered with global monetary and financial regulatory powers, along with the ability to issue a global currency and bonds, it will no longer have to ask its member states for funding. Nor will the UN. The IMF will be able to provide the UN with the revenues it needs to become an actual world government.”

The IMF and World Bank will be holding meetings in Washington on April 25 and 26. On the agenda will be reform measures which could include changing some conditions attached to receiving emergency funds. They will also discuss how best to distribute the extra money they have been allocated. There is a sense that as part of IMF’s new role, it must also address the concerns of emerging economies who are suffering from the global recession. The IMF recently approved a $47 billion line of credit to Mexico who became the first G-20 country to apply for such assistance and may not be the last. There still exists a double standard which allows richer countries to use fiscal expansion in the face of recession while poorer nations are forced into stricter economic restraints.

The global elite envision a world without borders. They continue to push their agenda of global governance through the IMF, the World Bank, the United Nations, the WTO and trade deals such as NAFTA. It is our duty to resist the tyranny of globalization or face enslavement. In the end, national sovereignty must prevail—if we are to have any future.

Dana Gabriel is an activist and independent researcher. He writes about trade, globalization, sovereignty, as well as other issues.
Contact: beyourownleader@hotmail.com
Posted by Dana Gabriel at 10:40 AM