Trade Wars: The Rise of Protectionism? 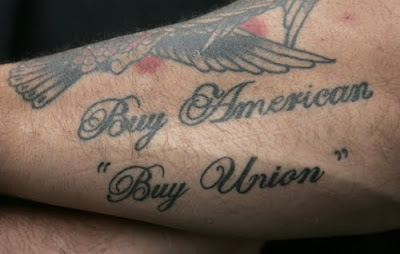 U.S. trading partners have expressed concern that any move towards protectionism could spread and spark trade wars that could further worsen the economic crisis. Around the world, many are looking to President Barack Obama for leadership and feel that he is the one who can save the current global trading system. Does this system really work? Is it worth saving? International bodies such as the WTO and free trade deals like NAFTA, have fostered a climate of corporate dominance trapping nations in a web of treaties that in some cases, trump their own laws. The U.S. is being used as an engine for world government. The global elite seek to capitalize on the economic chaos which in many ways they engineered, in order to further restructure the world.

The Buy-American provision was added to Obama's stimulus package, before it passed the House of Representatives. It blocks foreign iron and steel from being used on any projects that are part of the package. A Senate version of the bill could further expand to include other goods and materials. Although it does sound good, some feel the measure could backfire and cost more American jobs than it saves. Obama insists that he does not wish to set off a trade war and that the U.S. will honor its WTO obligations. He also warned of the dangers of protectionism, in a climate where global trade is already slumping. If he doesn't approve the Buy-American plan, he risks angering some of his core support, but if he doesn't make changes, he could alienate U.S. trading partners. It is obvious that Obama is going to have to strike a balance. He is calling for the stimulus package to be passed and signed by mid-February. Canada, the U.S.'s largest trading partner could be greatly affected by any Buy-American move.


For the most part, Canada's response has been measured and it has refrained from further escalating the situation, believing that they will probably be exempt from the provision. Under NAFTA, Canada sends 40% of its steel across the border and the Buy-American provision could cost Canadian jobs as well as deal a significant blow to its steel industry. From 2002-2003, the Bush Administration imposed trade sanctions on foreign steel in order to protect its own industries, but Canada and Mexico were exempt because of fears that such a move would violate NAFTA. Prime Minister Stephen Harper stated that the Buy-American provision not only threatens Canada, but all industrialized countries. There is a definite possibility that the situation could further escalate. The EU, Canada and other U.S. trading partners could in turn retaliate with similar measures. If some sort of resolution is not reached, there could be a rise in protectionism around the world, with the potential for international trade wars.

During the presidential campaign, Obama pledged to protect U.S. workers and industries and supported Buy-American initiatives, but at the same time cautioned against protectionist policies. He was also very critical of NAFTA during the Democratic presidential nomination race, calling the agreement a mistake and its effects devastating. He even threatened to use the opt-out clause, in order to put pressure on Canada and Mexico to agree to changes. This concerned Canadian officials, but they were reassured that NAFTA was quite safe. Later when Obama had all but wrapped up the nomination, he took a more moderate approach towards NAFTA and free trade in general. He even admitted that in regards to all the NAFTA bashing, he got caught up in all the rhetoric. Since then, he has been strangely silent on the issue, but it was recently reported by a White House spokesman that Obama is still committed to upgrading the agreement.

NAFTA essentially laid the foundation for a North American energy market. Canada is the largest U.S. supplier of crude oil and natural gas. Under NAFTA, Canada is prohibited from cutting off oil exports to the U.S., unless domestic supplies are rationed by the same amount. Canadian officials have previously hinted that oil, and a list of other conditions could be on the table, if NAFTA is reopened. Harper recently said that he doesn't expect Obama to push for any major reworking of the agreement. There is little doubt that Canada is in a better position of strength than when NAFTA was first negotiated. Obama is set to visit Canada on February 19 and it is expected that trade issues will be at the top of the agenda.

Even Obama supporters have to be disappointed with his cabinet appointments, which do not constitute change. His administration is full of Clinton retreads, political hacks, hawks, and those who have upheld failed economic policies. Many of his appointees are also past or present members of the Council On Foreign Relations and the Trilateral Commission. The new boss is beginning to look a lot like the old boss, except that I doubt if Obama will openly show the arrogance and disregard that Bush did. The best thing that Obama has going for him is that he isn't Bush, and although his words might have signaled a change in direction, his actions indicate that it's business as usual in the White House.

Dana Gabriel is an activist and independent researcher. He writes about trade, globalization, sovereignty, as well as other issues.
Contact: beyourownleader@hotmail.com
Posted by Dana Gabriel at 9:33 AM