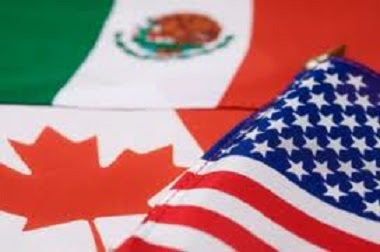 With the decline of the SPP, other groups have picked up the slack in an effort to further advance continental integration and protect any previous accomplishments. One of these such organizations is the Standing Commission on North American Prosperity which is an initiative of the U.S.-Mexico Chamber of Commerce. In May of this year, they held meetings in Atlanta, Georgia where Former Mexican President and staunch globalist, Vicente Fox called for a new era of North American collaboration. He stated, “If we are together, the U.S.‚ Mexico and Canada‚ no doubt we’ll be number one – the number one economy, the number one market, the number one consumer market – in the world.” He also said, “My dream is that we will not have a border.” Fox has been a strong advocate of deep continental integration using the European Union as the model.


NAFTA and the SPP would not have been possible without the tireless work of the Canadian Council of Chief Executives (CCCE). Former Liberal deputy prime minister, John Manley is set to replace the retiring Thomas d’Aquino as president of the CCCE. Stuart Trew of the Council of Canadians called it, “a match made in heaven for the Canadian and American business lobbies that could always count on Manley to endorse their priorities inside and outside of Parliament.” He also said, “Perhaps no politician has done more to further the CCCE’s case for a Fortress North America where business and investment can roam free while citizens in Canada and Mexico endure new U.S. security practices across the continent.“ The CCCE has called for the reinvention of North American borders and has pressured the Canadian government to further merge its military and security apparatus with their American counterparts. Since their inception, they have had intimate ties to both the Liberal and Conservative parties, with many of their proposals being implemented into policy. By his own admission, Manley’s role as head of the CCCE will be to further bridge the divide between business and government.

In his book Open and Shut: Why America has Barack Obama and Canada has Stephen Harper, Toronto journalist John Ibbitson calls for a North American environmental, economic and security accord. He argues that the border between Canada and the US should be eliminated. Vancouver Sun columnist, Barbara Yaffe comments on the book’s scenario of erasing the Canada-U.S. border. “The two nations would retain their distinct sovereignty but there would be no more passports or work visas. The continent would see a free flow of goods, services and people; common rules for immigration and refugees; joint inspection of shipping containers from abroad; an integrated terrorist watch list; a system of security enforcement around the perimeter of the continent.” Clearly, some of these measures would constitute a loss of sovereignty. This also ties into my recent article U.S.-Canada Border Security and Military Integration. It may seem inconceivable, but if the globalists get their way in the not-so-distant future, the northern border could be gone.

The North American Supercorridor Coalition (NASCO) recently held their 2009 Conference in Quebec. NASCO is made up of politicians and business leaders who promote trinational trade and transportation. The meetings in Quebec were attended by three Canadian premiers, four Mexican governors, as well as Iowa’s Governor, Chet Culver and Vermont’s Governor, James Douglas. Some have linked NASCO to a NAFTA Superhighway. In January of this year, the Texas Department of Transportation proclaimed that the Trans-Texas Corridor (TTC) was dead. The TTC has been referred to by many as the first leg of a NAFTA Superhighway and would extend from the Texas-Mexico border to the Oklahoma state line. The perceived demise of the TTC was more of a public relations stunt designed to try and silence critics and appease Texas lawmakers. The project will be broken up into smaller sections, making it more difficult to stop in the future.

It is through trade deals such as NAFTA and initiatives like the SPP that corporations have further strengthened their power and grip over our lives. Although trade with other nations is vital, the current NAFTA model is badly flawed and unfair. Further North American integration, deregulation and privatization will be devastating for many. This corporate agenda threatens our freedom, sovereignty, as well as our standard of living. Some have labeled plans for a North American Union as a conspiracy theory, but the fact remains that the deep-rooted agenda of continental integration continues.

Dana Gabriel is an activist and independent researcher. He writes about trade, globalization, sovereignty, as well as other issues.
Contact: beyourownleader@hotmail.com
Posted by Dana Gabriel at 6:21 PM