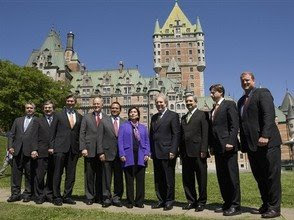 The fifth Leaders’ Summit on North American Relations was held on June 3 of this year in Quebec City. The summit was chaired by Quebec Premier Jean Charest. It focused on, “four main areas: the economic context and the financial crisis; North American integration: NAFTA’s track record and prospects; transportation and infrastructure; and energy and climate change.” In conjunction with the summit, the North American SuperCorridor Coalition (NASCO) Conference also took place from June 2-4.


The goal of the summit was to further boost North American competitiveness and enhance trilateral cooperation. The meetings and work sessions were attended by government leaders from Canada, the U.S. and Mexico. This includes Canadian provincial Premiers Gary Doer of Manitoba and Shawn Graham of New Brunswick, along with Shawn Skinner, Trade Minister of Newfoundland and Labrador. U.S. participants included state governors Chet Culver of Iowa and James Douglas of Vermont. Mexico was represented by state governors José Natividad González Parás, Governor of Nuevo León, Juan Manuel Oliva Ramírez, Governor of Guanajuato, Amalia Garcia Medina of Zacatecas, as well Economic Development Secretaries for Durango and Michoacán, Jorge A. Reynoso Martínez and Eloy Vargas Arreola. The leaders agreed that many necessary improvements can be made within the existing NAFTA framework.

In a Joint Statement, “the Leaders reaffirmed their belief that there is an important need for provincial and state governments to take part in forums aimed at promoting ongoing dialogue on issues of mutual interests.” They also, “reaffirmed the essential role that Canadian provinces and the Mexican and U.S. states have in developing trilateral relations and enhancing North America’s strategic positioning in the international arena.” They are committed to further strengthening continental relations and encouraging other Canadian provinces, as well as Mexican and U.S. states to participate in future summits. The next Leaders’ Summit on North American Relations will be held in Des Moines, Iowa in 2010.

As many are now aware, Mexico will host the fifth North American Leaders’ Summit in Guadalajara on August 9-10 of this year. The SPP website describes the summit as, “a unique opportunity for our three neighboring nations to identify ways to collaborate on shared opportunities and collectively address our common challenges. The leaders will discuss improving North American competitiveness as we recover from the economic downturn, promoting clean energy to combat climate change, and protecting the safety of our citizens.” It is also being reported that the Security and Prosperity Partnership (SPP) has been dismantled but some working groups will live on. If this is indeed true, it does not constitute a victory as there have been numerous calls to replace and rename the SPP. This includes a new report for the Brookings Institution and Canadian International Council entitled “Toward a New Frontier: Improving the U.S.-Canadian Border.” The report recommends that the U.S. move slower on SPP priorities with Mexico than with Canada and for the whole process to be renamed. It appears as if the latest summit could be used as an opportunity to revive stalled measures and launch a new strategy that would further build off past continental integration initiatives.

Dana Gabriel is an activist and independent researcher. He writes about trade, globalization, sovereignty, as well as other issues.
Contact: beyourownleader@hotmail.com
Posted by Dana Gabriel at 6:06 AM