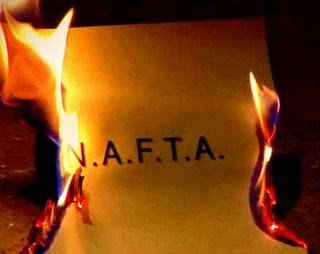 Obama has promised that one of his first orders of business as president will be to call upon the leaders of Canada and Mexico to renegotiate stronger labor and environmental provisions into NAFTA. Both he and Clinton were specific about using the six-month opt-out clause in order to put pressure for changes to be made. It appears as if Obama has backed himself into a corner. With all this talk about renegotiating NAFTA, the U.S. ambassador to Canada , David Wilkins, has said that NAFTA is too important to do away with or make any drastic changes to. He pointed to the fact that regardless who wins the American presidential election, NAFTA will stand.


With the sharp tone of language directed towards NAFTA, some Canadian government officials became concerned. It was reported that the Obama campaign contacted Canadian officials to set the record straight and told them not to take the criticism seriously. They also received warnings that Obama would be further speaking out against the agreement. Does this mean that all this tough talk regarding NAFTA was nothing more than political positioning and rhetoric? It’s not just Obama as Clinton tried to court working-class voters in the industrial Midwest, where NAFTA has hit the hardest by also telling the people what they wanted to hear.

For years, both the Democrats and Republicans have been double teaming the American people. One gets in power and further advances the New World Order agenda, and then falls out of favor and passes the baton to the other. In Canada , it was the Liberal party who spearheaded the Security and Prosperity Partnership (SPP) initiative, and with the Conservatives now in power, deeper integration has continued. It will be the same with the Democrats, who will further push for a North American Union, and this will not include dismantling NAFTA. Just like the Republicans, the Democrats are run by special interest groups and corporate powers that are pushing globalization and world government. With Obama in office, I am afraid that many on the left will go to sleep because their man and party will be in power. He doesn’t have the political baggage of a McCain or Clinton, and this makes him an even more useful tool of the elite.

In a recent article from washingtonpost.com, there are suggestions on what Obama should do as president. It included using the European Union as an example for economic and political integration. It talked about, “A functioning American Union that pools sovereignty.” It went on to say that this would not be possible by tearing down NAFTA. Much of the economic integration has already been achieved through NAFTA, and the SPP is continuing this process, further laying the foundation for a North American Union.

It is doubtful that the Democrats and President Obama will follow through on promises to fix NAFTA. It is so badly flawed, and a trade agreement that puts the interests of the people ahead of those of multinational corporations is what is needed. With all his talk on NAFTA, Obama has been silent on the SPP and the North American Union agenda. If there are no intentions of abandoning NAFTA, then it appears as if Obama’s change will be more of what we’ve come to expect from our politicians. With the next phase of the presidential campaign underway, I hope that this is not the last we’ve seen of NAFTA as an election issue.

Dana Gabriel is an activist and independent researcher. He writes about trade, globalization, sovereignty, as well as other issues.
Contact: beyourownleader@hotmail.com
Posted by Dana Gabriel at 7:45 PM