Towards a North American Energy Corridor 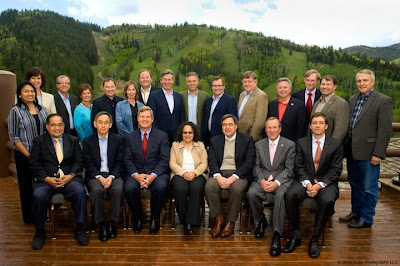 As a result of NAFTA, North America is already a well-integrated energy market with Canada and Mexico among the U.S.’s top energy trading partners. Through the Security and Prosperity Partnership (SPP), the North American Energy Working Group has further integrated a continental energy strategy. Other initiatives are also pushing towards a single North American energy policy.

The Western Governors’ Association annual conference was held in Park City, Utah on June 14-16, 2009. The meetings were attended by three Canadian western premiers. Montana Governor Brian Schweitzer and Saskatchewan Premier Brad Wall spearheaded plans to develop a cross-border Western Energy Corridor. Both have announced that they intend to establish a Western Energy Corridor Coalition to further promote the initiative. The proposed energy corridor would be the largest of its kind in the world. Schweitzer is also vice-chairman of the Western Governors’ Association and emphasized the importance the oilsands play in regards to U.S. energy security with its further development being crucial to American energy independence. He said, “The most important energy corridor on the planet is no longer the Persian Gulf. It runs from the oilsands, Fort McMurray to Port Arthur, Texas.” Absent from any discussions is the potential cost factor taxpayers would have to endure.


A report prepared by Michael Hagood of the Idaho National Laboratory entitled The Western Energy Corridor: An Overview of Strategic Resources and Trends Critical to North American Energy Security and Prosperity was released in June of this year. It states, “The U.S. is facing conventional oil and gas reserve declines, increased demand, increased foreign dependency, resource nationalization, price volatility, underinvestment in infrastructure, changing domestic production policy.” It also goes on to say, “Energy development within the Energy Corridor will require integrating, optimizing and stewarding a diverse set of domestic (and N. American) energy resources, interconnected by a dependable delivery infrastructure, and development in an environmentally progressive manner.” The Western Energy Corridor could boost plans for a North American energy resource pact.

A northeast energy corridor is also being proposed. In March of this year, New Brunswick Premier Shawn Graham and Maine Governor John Baldacci announced support for an international energy corridor. Premier Graham stated, “The proposed energy corridor will help accelerate the development and deployment of clean, renewable and greenhouse-gas-free electricity generation resources in both New Brunswick and Maine, as well as help address and support the overall North American energy security agenda." The energy corridor would position New Brunswick and Maine as strategic energy hubs and link their resources to energy stressed East Coast states. Governor Baldacci said, “Exploring the potential for private investment in the northeast energy corridor is a vital next step to realizing our shared goals of achieving energy independence.” Much of Canada’s energy supply is already bound by NAFTA. Any move towards a North American energy corridor would lead to the U.S. further securing access to Canadian resources.

The North American Competitiveness Council (NACC) was formed in 2006 to ensure that corporate concerns were being addressed inside the SPP framework. The NACC released a Statement to the Leaders in Advance of the 2009 North American Leaders' Summit set to take place in Guadalajara, Mexico on August 9-10 of this year. In conclusion, it says “Trilateral cooperation on borders, regulations, energy, and other important issues is essential to the prosperity and security of North America. We and the business communities we represent trust that our advice to date has assisted Leaders in choosing priorities and driving progress. Going forward, the NACC stands ready to offer our ideas and expertise, and we hope the three governments will continue with the NACC.” NAFTA and the SPP have further opened up oil and gas production and markets to foreign corporations. The NACC has promoted energy privatization in Mexico and pushed Alberta’s oilsands development with the goal of deregulating energy markets and fast-tracking North American energy integration.

A North American energy strategy is being implemented, one that clearly favors the U.S. and there are fears that Canada and Mexico could become nothing more than resource colonies. Further North American integration is also being achieved through environmental concerns and commitments. Greater continental cooperation on energy matters including clean energy, a shared approach to climate change, along with a cap-and-trade system are moving forward. Unfortunately, many solutions being offered to combat environmental issues are in the form of more taxes and more governmental control over our lives.

Dana Gabriel is an activist and independent researcher. He writes about trade, globalization, sovereignty, as well as other issues. Contact: beyourownleader@hotmail.com
Posted by Dana Gabriel at 10:15 AM