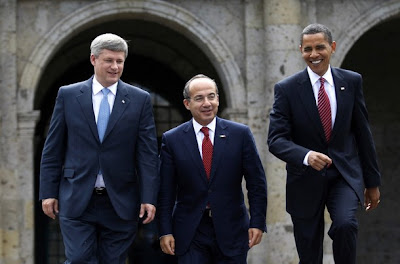 The Security and Prosperity Partnership (SPP) has essentially been rendered inactive, yet many of its key priorities such as energy integration were part of the agenda at the recent North American Leaders’ Summit held in Guadalajara, Mexico on Aug 9-10. Environmental concerns are also being used to further advance North American integration as the U.S., Canada and Mexico have committed to a more continental approach in combating climate change.

In the North American Leaders’ Declaration on Climate Change and Clean Energy it states, “We stress that the experience developed during the last 15 years in the North American region on environmental cooperation, sustainable development, and clean energy research, development, and deployment constitutes a valuable platform for climate change action, and we resolve to make use of the opportunities offered by existing bilateral and trilateral institutions.” The leaders offered a shared vision for a low-carbon North America and the importance of taking aggressive action on climate change, including better cooperation in reducing emissions. In conclusion, it says, “In order to facilitate these actions, we will work cooperatively to develop and follow up on a Trilateral Working Plan and submit a report of results at our next North American Leaders Summit in 2010.”


A more North American strategy in regards to climate change is moving forward. This includes coordination of an emissions trading system. It is expected that a new version of the Canadian government's climate change plan will be released this fall which will be more comparable to U.S. efforts. In a recent article from the Wall Street Journal, one of the creators of the cap-and trade concept, Thomas Crocker says that he is now, “skeptical that cap-and-trade is the most effective way to go about regulating carbon." Many critics of a cap-and-trade system argue that it could further damage the economy and lead to millions of jobs being lost.

An article from the New York Times entitled Climate Change Seen as Threat to U.S. Security states a, “growing number of policy makers say that the world’s rising temperatures, surging seas and melting glaciers are a direct threat to the national interest.” It goes on to say, “If the United States does not lead the world in reducing fossil-fuel consumption and thus emissions of global warming gases, proponents of this view say, a series of global environmental, social, political and possibly military crises loom that the nation will urgently have to address.” The security card is being used in an effort to further galvanize support for climate and energy legislation, including a cap-and-trade system which will be debated in the Senate next month.

It is hard to deny all the fear-mongering that has been associated with global warming. It has become like a religion with no room for debate and those not agreeing with man-made global warming being labeled as heretics. Although as humans we have done some harm to the planet, it is the doom and gloom of global warming that receives the most attention while other environmental issues are seemingly ignored. Whether you believe the threat of climate change to be real or exaggerated it is being used to further integrate North America. Global warming hysteria is a vehicle for social engineering with many solutions being offered that could radically alter our very existence.

With the decline of the SPP and cracks emerging in NAFTA, it appears as if North American integration is in disarray. Let me remind you that the global elite pushing for a North American Union and world government are masters of getting order out of chaos. The SPP could be rebranded under a new name, but regardless, there are other initiatives that could fill its void in regards to continental integration.

Dana Gabriel is an activist and independent researcher. He writes about trade, globalization, sovereignty, as well as other issues. Contact: beyourownleader@hotmail.com
Posted by Dana Gabriel at 4:50 PM