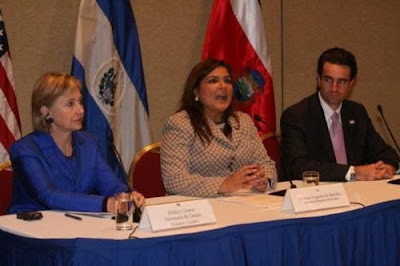 At the Pathways to Prosperity Ministerial held in El Salvador on May 31, 2009, Secretary of State Hillary Clinton pledged support for the PPA. She stated, “President Obama has emphasized that it's not important whether ideas come from one party or another, so long as they move us in the right direction. This meeting builds on the work of the previous U.S. administration, but the President and I are also committed to re-launching Pathways to Prosperity, and expanding its work to spread the benefits of economic recovery, growth, and open markets to the most vulnerable and marginalized citizens of our region.” It appears as if the Obama administration wishes to put their own stamp of approval on the PPA and further expand it.

The PPA now includes 14 partner countries Canada, Chile, Colombia, Costa Rica, Dominican Republic, El Salvador, Guatemala, Honduras, Mexico, Nicaragua, Panama, Peru, the U.S. and Uruguay. Besides NAFTA and CAFTA, there are other Free Trade Agreements amongst partner nations that are already active, with some being negotiated or pending legislative approval. At the meeting, Clinton also stressed that, “Pathways should be open to working with new partners including other nations and sub-regional banks that share our commitment to open markets and greater social inclusion. I want to note the presence of the observer countries – Brazil and Trinidad and Tobago – that are here today. Going forward, I hope you and other countries from our hemisphere will join us in this initiative as full members.” If you combine all the bilateral and regional trade deals in the Americas, it could facilitate a larger multilateral agreement. Expanding the PPA could be a backdoor to achieving something similar to the FTAA.

A Joint Statement By North American Leaders from the recent Summit held in Guadalajara, Mexico on Aug 9-10 stated, “Our three governments recognize that we cannot limit our efforts to North America alone, and we have agreed to instruct our respective Ministers to strive for greater cooperation and coordination as we work to promote security and institutional development with our neighbors in Central America and the Caribbean.” Could they be referring to the PPA? The Leaders also promised to hold public consultations on the North American agenda as it appears that they have learned from mistakes made with the SPP. At least in rhetoric, the PPA attempts to balance economic progress and trade initiatives with social justice. They can talk all they want about fair trade, social development priorities and how they are going to listen to our concerns. Until something is done with the flawed NAFTA model which has benefited multinational corporations at the expense of labor, health, safety and environmental rights, it will not mean a damn thing.

An article from April of this year entitled Obama's Agenda for Change and the 2009 Summit of the Americas called on the new administration to announce the cancellation of the SPP, along with its hemispheric extension, the PPA. It pointed out that, “The PPA bears many of the hallmarks of the SPP.” It goes on to say, “The PPA, like the SPP, is little more than an attempt to justify economic deregulation and to promote an escalation of militarism in the region.” The SPP website now says that it will serve as an archive for documents and will not be updated and announced that, “Going forward, we want to build on the accomplishments achieved by the SPP and further improve our cooperation.” Stuart Trew of the Council of Canadians reported that as a venue for North American integration, the SPP is dead.

Trade, social development and foreign aid, along with other endeavors, have been used to further promote U.S. interest around the globe. In some cases, this has resulted in shared security goals and closer military cooperation which has led to U.S. involvement in the region. In the aftermath of the SPP’s demise, beware of other initiatives that could take its place and advance economic, political, social, security and military integration, not only in North America, but the rest of the Western Hemisphere.

Dana Gabriel is an activist and independent researcher. He writes about trade, globalization, sovereignty, security, as well as other issues. Contact: beyourownleader@hotmail.com Visit his blog at Be Your Own Leader
Posted by Dana Gabriel at 4:54 AM