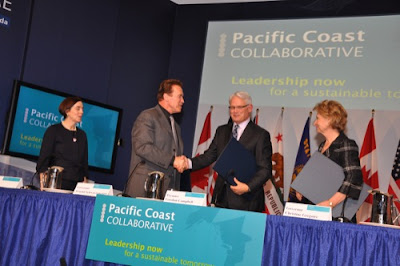 In 2008, the Pacific Coast Collaborative was established between Alaska, British Columbia, California, Oregon and Washington as, “a formal basis for cooperative action, a forum for leadership and information sharing, and a common voice on issues facing Pacific North America.” Some of its key priorities include action on clean energy, regional transportation, emergency management, sustainable regional economy, ocean conservation and climate change, as well as other issues. The inaugural Leaders’ Forum of the Pacific Coast Collaborative was held in Vancouver, British Colombia on February 12, 2010. It was hosted by Premier Gordon Campbell and chaired by California Governor Arnold Schwarzenegger. The meeting was also attended by Washington Governor Christine Gregoire and Oregon Secretary of State Kate Brown. Although Alaska is also a member of the group, they were not able to send a representative to the meeting. It was announced that Oregon will be hosting the next forum to be held later this year.

The Pacific Coast Leaders signed two action plans. The first being- Innovation, the Environment and the Economy which, “sets out a series of co-operative initiatives to promote renewable and low-carbon energy and energy conservation, including developing Interstate 5/Highway 99 as a green transportation corridor. It also promotes development of high-speed rail from San Diego to Vancouver and the move to ‘Green Ports’ through co-operation to reduce local air pollutants and greenhouse gas emissions.” The second action plan on Ocean Conservation and Coastal Climate Change Adaptation, “focuses on co-operation on invasive species, reductions in toxins and other pollutants, promoting sustainable fisheries management and research into impacts from climate change and adaptation options.” The leaders also released a document entitled Vision 2030: Positioning Pacific North America for Sustainable Prosperity which sets out a strategic outlook for regional collaboration.

One of the Pacific Coast Collaborative top priorities includes a high speed rail system. On its website it states, “For the Pacific Coastal region to remain competitive, we need transportation systems that will facilitate the movement of people and goods north to south while reducing the number of vehicles on our highways. Rail, particularly high speed rail, can deliver significant benefits to the region including advancing climate change goals, energy conservation, congestion reduction, and job creation for the citizens of the region.” Cassandra Anderson’s article Agenda 21 Alert: Obama Railroads Us With the Bullet Train details how in many ways a high speed rail system in the U.S. would be impractical and costly, with the majority of the trains running off of diesel fuel. President Obama has promised that such an undertaking would create many jobs, but it has been reported that much of the needed equipment and supplies would have to be outsourced. The article also lays out how future transportation systems could restrict auto and personal mobility in an effort to further control the population.

At the recent meeting, Pacific Coast Leaders urged further local action in combating environmental issues. Governor Schwarzenegger acknowledged that, "We're united, there's no two ways about it. Politically, ecologically, we speak with one voice.” He also added that, "We saw at Copenhagen that national governments and the national community has not yet been able to come to an agreement to reducing green house gas emissions. The UN and the national governments have realized that the sub-national governments are really the ones in the end who can put the pressure on and engage the kind of action that is needed." In her article Agenda 21 Alert: Schwarzenegger’s ‘True Lies’ in Copenhagen Cassandra Anderson stated that, “The globalists’ battle for complete control over all populations is from ‘global to local.’ This is why Arnold was brought to speak at the Copenhagen Summit. He truthfully revealed the power that state and local governments have in accomplishing carbon reduction goals.” Anderson went on to say that, “States can enact their own carbon emission reduction laws and Cap and Trade schemes- it is not necessary for international treaties and federal regulations to be passed.”

The Western Climate Initiative (WCI) was launched in 2007 and includes some U.S. states and Canadian provinces as member partners and observers. Their website states that, “The WCI is a collaboration of independent jurisdictions working together to identify, evaluate, and implement policies to tackle climate change at a regional level.” In September of 2008 the WCI unveiled the centerpiece of their strategy, a regional cap-and-trade program to regulate greenhouse gas emissions. “The first phase of the cap-and-trade program begins on January 1, 2012, covering emissions from electricity, including imported electricity, industrial combustion at large sources, and industrial process emissions for which adequate measurement methods exist. The second phase begins in 2015, when the program expands to include transportation fuels and residential, commercial and industrial fuels not otherwise covered.” With an eye on the future, the WCI also admitted that their, “cap-and-trade program is designed in such a way that it can provide a model for, be integrated into, or work in conjunction with any future U.S. or Canadian emissions-reduction programs.”

President Obama has been forced to delay his push for a national cap-and-trade plan as legislation has been stalled in the U.S. Senate. Many critics of the program argue that it could lead to millions of jobs being lost and the push for a green economy might further hamper economic recovery. A North American climate change strategy is moving forward which includes more emphasis being placed at a regional and local level. The threat of man-made global warming has been discredited in the eyes of many, yet the environmental agenda continues. Protecting our planet has turned increasingly more political and profitable. Under the guise of safeguarding the environment, many solutions being offered are in the form of more taxes and more control over our lives.

Dana Gabriel is an activist and independent researcher. He writes about trade, globalization, sovereignty, as well as other issues.
Contact: beyourownleader@hotmail.com

Thanks to Akston from Statismwatch.ca for the heads up.
Posted by Dana Gabriel at 3:37 PM