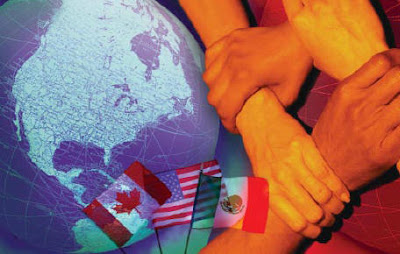 The North American Forum on Integration (NAFI) was created in 2002, and is one of many think tanks pushing for closer continental ties. In 2005, NAFI organized the Triumvirate, a North American model parliament which meets once a year. The exercise brings together university students from the U.S., Mexico and Canada with participants assigned the roles of legislators, journalists or lobbyists. Over the years, the mock parliament has debated and drafted resolutions on such key issues as trade corridors, immigration, NAFTA’s Chapter 11, along with the creation of a North American investment fund and a customs union. Infowars reported that last year’s Triumvirate gathering was cancelled due to the swine flu pandemic scare.

The Triumvirate 2010 will be held in Querétaro, Mexico. A description on its website states that, “This 5th edition will gather a hundred university students from Mexico, the United States and Canada to participate, from May 30th to June 4th, 2010, in an international negotiation exercise in which they will simulate a parliamentary meeting.” Some of the main objectives of the Triumvirate event include, “To allow participants to familiarize themselves with the functioning of democratic institutions as well as North American political, economic, environmental and social realities; to develop the participants’ sense of belonging to North America (and) to increase intercultural exchanges and promote the creation of academia networks.” This year’s delegates will address such topics as making smart borders more efficient, managing transboundary water in North America, as well as countering human trafficking and consolidating North American governance. While the model legislature is seen as an opportunity for students to better understand the political process and the challenges facing the continent, in many ways it mirrors actual efforts to further integrate the three countries. This includes the vision of a real functioning North American parliament similar to the European Union (EU) model.

In a 2008 article, journalist Steve Watson described the mock parliament as, “another example of an overarching movement on behalf of globalist business leaders and politicians to merge the three nations of North America into an EU like federation.” He added that, “Integration meetings such as the NAFI Triumvirate are simulations of the exact practices currently being undertaken by the SPP and its offshoot organizations. The NAFI Triumvirate is designed to familiarize ‘future Canadian, American and Mexican leaders’ with the processes involved in such practices.” Watson also pointed out that missing from the whole activity is any simulated opposition to the agenda being presented. The reality is that not all issues need to be addressed in a bilateral, trilateral or global fashion as some are best solved at a local, state and national level. It is important to learn about other countries and instill a sense of cooperation, but the Triumvirate exercise appears to be aimed at indoctrinating students to view themselves as North American citizens as opposed to Americans, Canadians or Mexicans.

Many of the recommendations from the 2005 report, Building a North American Community became part of the Security and Prosperity Partnership (SPP) agenda and the push for deep integration. The policy paper advocated the creation of a network of centers for North American studies. It recommended that, “the three governments open a competition and provide grants to universities in each of the three countries to promote courses, education and research on North America and assist elementary and secondary schools in teaching about North America.” The report also recommended developing, “teacher exchange training programs for elementary and secondary school teachers. This would assist in removing language barriers and give some students a greater sense of a North American identity.” In his article The Future of North America, Robert Pastor, one of the leading proponents of continental integration proclaimed, “To educate a new generation of students to think North American, each country should begin by supporting a dozen centers for North American studies. Each center should educate students, undertake research, and foster exchanges with other North American universities for both students and faculty.”

The Center for North American Studies at American University in Washington, D.C., “was established to educate a new generation of students, to promote policy debate among the governments and the public, and to undertake research on ideas for a continental future.” Arizona State University has also created the North American Center for Transborder Studies whose mission, “is to advance greater understanding of border and trilateral issues in North America by supporting scholars who contribute to the development of innovative theory and actionable policy analysis regarding these issues.” The North American Integration and Development Center based at the University of California, Los Angeles, “seeks to build linkages among a wide variety of institutions, organizations, and community groups in order to promote North American integration.” These various centers, along with other initiatives are part of the ongoing efforts to further condition and train a new generation into accepting a North American consciousness.

The ideology of globalization is deeply embedded in the corporate structure, mass media, government, as well as in the whole educational system. Together they are working to shape the minds of the next generation. Students at all levels are being indoctrinated to conform to universal values and standards. Under a new global order, there is no room for nationalism or individuality. Increasingly, it is special interest groups, multinational corporations, think tanks, and other nongovernmental organizations who are pulling the strings of power. National sovereignty remains one of the last obstacles to the full implementation of a North American Union and global government.

Dana Gabriel is an activist and independent researcher. He writes about trade, globalization, sovereignty, as well as other issues.
Contact: beyourownleader@hotmail.com
Posted by Dana Gabriel at 4:52 PM