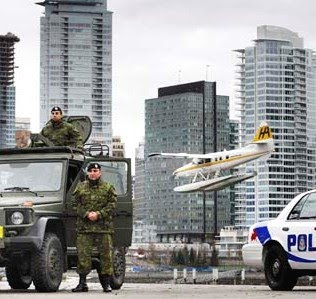 Unmanned drones are patrolling the U.S.-Canada border as part of the war on terrorism and to curb smuggling, along with drug trafficking. It is unclear if they will be used for surveillance during the Games, but U.S. Customs and Border Protection spokesman, Juan Munoz-Torres has stated that, “If the RCMP or Canadian government believes they can make use of the aircraft for support during the Olympics, we will be more than willing to provide it.” In Afghanistan, Pakistan and other parts of the world, armed American drones continue to carry out strikes against suspected terrorists and insurgents. It is interesting that many of the weapons used in the war on terrorism overseas are later deployed for domestic purposes. The use of unmanned drones on the northern border will only add to the further militarization of North America.

In May of 2009, former Public Safety Minister Peter Van Loan and U.S. Department of Homeland Security Secretary Janet Napolitano signed the Shiprider Agreement which grew out of a pilot project inspired by the Security and Prosperity Partnership. It was later tabled in the House of Commons as Bill C-60, the Keeping Canadians Safe (Protecting Borders) Act. The cross-border maritime security law would deputize U.S. officers operating in shared waterways during integrated operations, including pursuit on adjacent land. Stuart Trew of the Council of Canadians commented on the motivation surrounding Bill C-60, as well as several other pieces of legislation. “The effort seems purely aimed at appeasing U.S. concerns about Canadian security practices and is another step towards a perimeter approach to ‘securing’ North America as a whole.” As for the prorogation of Canada’s Parliament, he noted that, “although with C-60 off the order paper there is no legislative backing for the arrangement. U.S. police forces will be patrolling Canadian waterways on RCMP ships during the 2010 Winter Olympics.”

General Gene Renuart, commander of the North American Aerospace Defense Command(NORAD) and U.S. Northern Command (NORTHCOM) has given some indication as to the function both will play during the Olympics. He stated that, “We, in our NORAD role, will maintain the air sovereignty both for the U.S. and Canada, the air security over the Olympic games.” He went on to say, “In our NORTHCOM role, we’ll probably provide some additional security and support…and consequence management response capability.” NORAD’s deputy commander Lt. Gen. Marcel Duval recently expanded on the bi-national organization’s responsibilities during the Olympics. “NORAD will do its normal airspace warning and aerospace control mission over the games using Canadian NORAD-region assets, (such as) Canadian CF-18s.” He also added that, “We’ll be supported by other NORAD assets like air-to-air refueling and airborne early-warning aircraft.” In regards to Canada Command, NORTHCOM and NORAD’s preparations for the Olympics, Duval acknowledged, “In many ways, the 2010 Winter Games have allowed the three commands to come closer, in terms of understanding, cooperating and collaborating.”

Canadian officials continue to work closely with their American counterparts in monitoring potential security threats to the Games and its shared border. The Olympic Security Coordination Centre in Bellingham, Washington, “will coordinate the security efforts for over 40 federal, state and local agencies on the U.S. side of the U.S. – Canadian border. This facility will provide a strategic response platform to facilitate critical response efforts during the Olympic Games and beyond.” In the advent of an emergency situation, the bilateral Civil Assistance Plan signed by the U.S.-Canadian military in February of 2008 could be activated. The agreement allows the military of one nation to support the other during a civil emergency such as a flood, forest fire, hurricane, earthquake or a terrorist attack.

In late December 2009, pipeline and energy storage company Kinder Morgan notified the RCMP that while en route from Alberta to a North Vancouver facility, two one-tonne bags of ammonium nitrate went missing. This is the same chemical compound which has been used in several past terrorist bombings. Kinder Morgan later determined the missing bags were as a result of a clerical error. The RCMP have not been able to confirm the company's findings and continue with their investigation. This could be setting up a cover story for a possible false flag terrorist attack during the Olympics.

A U.S. State Department fact sheet is advising Americans attending the Vancouver 2010 Olympics to use caution and be alert of their surroundings at all times. While it notes that there has been no specific or credible threats associated with the Olympics, it does warn of a possible Al-Qaeda attack. It states that, “As security increases in and around Olympic venues, terrorists could shift their focus to more unprotected Olympic venues, open public spaces, hotels, railway and other transportation systems, churches, restaurants, and other sites not associated with the Olympics.” It goes on to say that, “Al-Qaeda's demonstrated capability to carry out sophisticated attacks against sizable structures - such as ships, large office buildings, embassies and hotels - makes it one of the greatest potential threats to the Olympics.” In the aftermath of the failed Christmas day bombing attempt, once again terrorism is being used to create a climate of fear and insecurity.

Whether or not you buy into the whole war on terrorism, it is being used to launch wars of aggression and further expand the American empire. It is also very much intertwined with the whole process of deep North American integration and plans for a continental security perimeter. The threat level for the upcoming Olympics remains low, but some are warning that the proroguing of Canada’s Parliament, along with the huge security apparatus being assembled for the Games might be setting the stage for a possible false flag terror event. This could be used to pass more anti-terrorist and other draconian pieces of legislation. It could also lead to a martial law scenario with American troops occupying parts of Canada.

Related Articles by Dana Gabriel
A North American Security Perimeter on the Horizon
Police State Canada 2010 and the Olympic Crackdown
Police State Canada 2010 and the Dark Side of the Olympics
U.S.-Canada Border Security and Military Integration
The SPP and Merging Military Command Structures
Afghanistan: Canada Must Pursue a More Independent Foreign Policy
Posted by Dana Gabriel at 4:14 PM