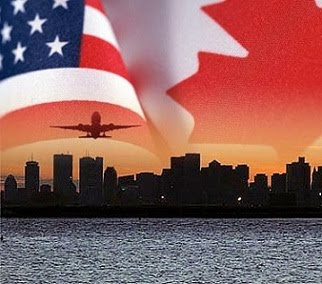 In November of 2007, the Conservative government expressed concerns over privacy implications associated with the U.S. Secure Flight Program and filed objections with the Department of Homeland Security. They were urging an exemption on a measure that would require Canadian airlines to turn over information on passengers flying over the U.S. en route to other destinations. Despite their grievances being dismissed, they eventually caved in to U.S. demands. In a move to further bring Canada in line with American air travel security rules, Bill C-42, An Act to amend the Aeronautics Act was introduced in Parliament on June 17 of last year. With little media attention, it passed through the House of Commons on March 2, 2011, by a vote of 246 to 34. On March 23, it received royal assent and became law. Under Bill C-42, Canadian airlines are required to send traveler information through the Secure Flight Program 72 hours before departure. The Transportation Security Administration checks the data against security watch lists which could result in passengers receiving extra screening or even being barred from boarding their flight.

In an Action Alert from December 2010, the Council of Canadians described how Bill C-42, “requires that a large amount of your personal information be transmitted to the U.S. Department of Homeland Security even if your flight only passes through U.S. airspace. It's not just name, gender, age and destination as government sources claim. Any and all information contained in your travel records will be transmitted to U.S. security officials, who may use it for whatever purposes they see fit.” It goes on to say, “Canada has made many steps to harmonize airline security with U.S. programs but none has been good enough to prevent ever more draconian demands. Our severely flawed made-in-Canada ‘no fly’ list was supposed to prevent the imposition of the U.S. list on Canada. But the benchmark has moved again to the point the U.S. must issue travel permissions to Canadians.” The Conservative government has failed to sufficiently safeguard the privacy of Canadians. Personal information collected could be used for immigration, as well as law enforcement purposes and could also be shared with other countries. Bill C-42 surrenders Canadian authority to the Department of Homeland Security.

Initially, the Liberal party criticized the government for introducing Bill C-42 and accused them of abandoning Canadian sovereignty. In an NDP press release issued before the crucial vote on the bill was held, they slammed the Liberals for now supporting it. They also questioned whether the Liberals could be trusted to defend privacy concerns associated with the proposed Canada-U.S. Beyond the Border trade and security deal. Stuart Trew of the Council of Canadians acknowledged, “It was disturbing to see the Liberals so willing to vote in favour of C-42 when it is clearly wrapped up in Harper’s perimeter security plan with the U.S., which they have challenged as too secretive and in need of more debate.” He also added, “The ease with which the federal government handed over sovereignty on this critical security policy does not bode well for the perimeter security talks with President Obama.” Bill C-42 is a key component of the North American security perimeter. It is another example of how Canada is being further pressured to adopt U.S. security standards. In many cases, the Department of Homeland Security will now have the final say on who is allowed to travel to and from Canada.

In February of this year, a British man who was travelling with his family from Toronto back to England, was denied permission to board a plane because his name was on the U.S. no-fly list. After being stranded for several days, the British Embassy intervened and Dawood Hepplewhite was allowed to fly to Glasgow, Scotland. At the time, the Canadian Civil Liberties Association (CCLA) pointed out, “Bill C-42 hasn’t yet passed, but if aircraft carriers are providing passenger information to U.S. Secure Flight for overflights, then it would seem the aircraft carriers may be acting as if Bill C-42 is already law.” There are still questions as to why Hepplewhite’s name was on the no-fly list, but he suspects it is because he is a white Muslim and once applied to work in Yemen. The CCLA has concerns about the no-fly list's fairness and explained, “if a person believes they were wrongfully placed on the U.S. No Fly List, it is apparently very difficult to find out why they were placed on the list, and difficult to get their name off of the list.” As a result of the war on terrorism, the U.S. now has more control over air travel and is not only dictating North American, but also international security practices.

Increasingly, U.S. Department of Homeland Security requirements are being imposed on Canadians. There are real concerns on how civil liberties are being eroded by these new security measures. Canada has further surrendered privacy and sovereignty when it comes to air travel. In a fully integrated North American security perimeter, the U.S. would have the ultimate power to decide who is allowed to enter and who is allowed to leave.

Dana Gabriel is an activist and independent researcher. He writes about trade, globalization, sovereignty, security, as well as other issues. Contact: beyourownleader@hotmail.com Visit his blog at Be Your Own Leader
Posted by Dana Gabriel at 3:05 PM