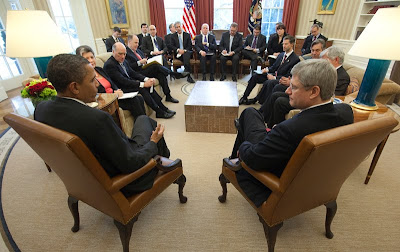 On March 10 of this year, Department of Homeland Security Secretary Janet Napolitano and Canada's Public Safety Minister Vic Toews unveiled a Joint Border Threat and Risk Assessment. The report focuses on national security, criminal enterprises, migration, agriculture and health threats to the border. A press release described how the joint initiative, “is a part of a shared vision for border security that Secretary Napolitano and Minister Toews outlined during meetings held throughout 2010, and reflects their mutual commitment to working together to safeguard both nations' vital assets, networks, infrastructure and citizens.” The assessment addresses common threats to the border such as, “terrorism and transnational crime articulated by President Barack Obama and Canadian Prime Minister Stephen Harper in February. Their historic declaration – ‘Beyond the Border: A Shared Vision for Perimeter Security and Economic Competitiveness’ – sets forth how the United States and Canada will manage our shared homeland and economic security."

The Conservative government has maintained that a security perimeter with the U.S. will not impact on sovereignty, but a poll issued last month suggested that Canadians remain concerned. Postmedia News reported that a survey conducted by Ipsos Reid found that 68% believe Canada, “will compromise too much power over decisions about immigration, privacy and security to get a perimeter security agreement.” The poll also found that 51% of Canadians don't, “trust Stephen Harper to negotiate a deal that improves border access but doesn't give up powers that are important to Canada maintaining its own independence.” With respect to transparency, "An overwhelming 91% of Canadians say the negotiations should take place in public so that they can see what is on the table." There is little doubt that the border deal will mean some sort of tradeoff between sovereignty and security.

Since the Beyond the Border declaration was announced, the Canadian government has taken some heat for the bilateral talks being held in secret. In an attempt to try and curb some of the criticism, they launched a new website where the public can share their ideas on the planned security perimeter. The submission guidelines explain, “From now through to June 3, 2011, you can participate in our online consultation and provide your thoughts on initiatives that would improve security while supporting economic competitiveness, job creation and prosperity.” Apparently, the results will later be published and will help shape an action plan that is expected to be released in the coming months. Much like the infamous Security and Prosperity Partnership of North America, this latest undertaking with the U.S. lacks transparency and thus far, Parliament and Congress have also been excluded from the whole process. While asking for feedback from Canadians is a step in the right direction, the measure falls well short of any national debate on the subject.

The new security perimeter deal has yet to be defined, at least publicly. In a recent Action Alert, the Council of Canadians acknowledged, “no one can know for sure what ‘perimeter security’ means until the details, which are being developed behind closed doors, are announced in June. And we are being asked to suggest only improvements (not criticisms) of a plan we haven't seen. Furthermore, the government is clearly prioritizing the input of business groups, though all Canadian residents will be impacted by deeper security ties with the United States.” NDP MP Brian Masse called the government’s decision to offer only online public input on the proposed North American security perimeter, unacceptable and inadequate. In a letter written to International Trade Minister Peter Van Loan, Masse stated, “It is my hope that you will reconsider this half measure and give Canadians the opportunity to engage the government directly in this process by conducting public consultations across Canada.” With a federal election now set for May 2, Canadians will get a chance to voice their opinions at the ballot box.

Negotiations on a Canada-U.S. trade and security agreement have sparked privacy concerns, along with fears that sovereignty could be sacrificed. During the course of the election campaign, this could become an important issue. While a lot can change over the next month, the Conservatives are currently leading in the polls. If they are able to secure a majority government, this would give them a clear mandate to pursue a continental security perimeter pact. The opposition Liberals have been somewhat critical of the proposed deal, but if they do win the election, it is unlikely that they would make any changes. In Canada, whether it’s the Conservative or Liberal party holding the reigns of power and in the U.S., a Democrat or Republican in the White House, deep North American integration continues unabated.

Dana Gabriel is an activist and independent researcher. He writes about trade, globalization, sovereignty, security, as well as other issues. Contact: beyourownleader@hotmail.com Visit his blog at Be Your Own Leader
Posted by Dana Gabriel at 5:33 PM