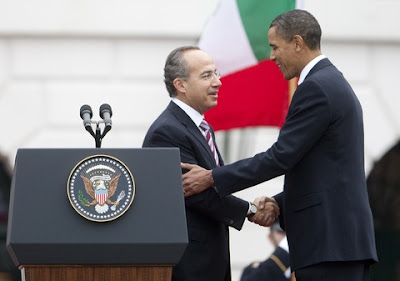 There were growing concerns over drug violence prior to the recent U.S.-Mexico summit, along with other issues which have been a source of friction between the two countries. Despite any perceived tension, both leaders showcased their bilateral partnership and vowed to enhance collaboration. They focused on immigration, along with economic issues and took steps to end the long-standing dispute over cross-border trucking. The leaders also agreed to further deepen their cooperation in combating drug cartels.

During a Joint Press Conference following their bilateral meeting, President Barack Obama praised Mexico as a valued partner and thanked President Felipe Calderon for, “being here today to deepen the cooperation that is so essential to the prosperity and security of both of our countries.” He noted, “we’re moving ahead with plans for a 21st century border so people and goods can cross securely and efficiently. We’re working to coordinate and streamline regulations and get rid of unnecessary trade barriers to make it easier to do business together.” Obama also announced, “we finally have found a clear path to resolving the dispute over trucking between our two countries.” He added, “I look forward to consulting with Congress and moving forward in a way that strengthens the safety of cross-border trucking, lifts tariffs on billions of dollars of U.S. goods, (and) expands our exports to Mexico.” Under NAFTA, the border was to be opened to Mexican trucks, but safety concerns blocked the provision’s implementation. In the coming months, negotiators are expected to table an agreement that will include a phased-in program to settle the issue.

In an interview that took place a week before his meeting with Obama, a frustrated Calderon criticized U.S. cooperation in the battle against drug cartels as insufficient. During his visit, there was no apparent dissension, at least not publicly. It was clear by their press conference which followed bilateral talks, that both leaders were moving forward and taking the opportunity to further bolster ties between the two countries. Obama proclaimed, “We’re also deepening our cooperation against the drug cartels that threaten both our peoples.” He went on to say, “I have reaffirmed to President Calderon that in this cause, Mexico has a full partner with the United States.” As part of the Merida Initiative Obama said, “we are continuing to speed up the delivery of equipment and training that our Mexican partners need to keep up this fight.” In regards to security issues, Calderon stated, “both governments have taken on our positions as co-responsible parties in the fight against transnational organized crime. This is a paradigm change in our relationship.” He also explained, “Our bilateral relationship, my friends, does not only have a huge impact on the lives of Mexicans and Americans, but today it’s taken on with increasing strength and clarity and coordination by both of our governments.”

In her article US-Mexico Relations Back on Track–In the Wrong Direction Laura Carlsen, director of the Americas Policy Program described how, “The binational relationship suffered some serious blows in the weeks preceding Calderon’s Washington visit. The release of thousands of Wikileaks cables between the U.S. Embassy in Mexico City and the State Department revealed U.S. officials’ deep concerns regarding the Mexican government’s capacity to carry out its high-risk war on drug cartels.” She added, “Tensions also followed the assassination of Jaime Zapata, a U.S. Immigration and Customs Enforcement agent in San Luis Potosí on Feb. 15. Although the Mexican government has arrested the alleged attackers–members of the Zetas drug cartel–the incident highlighted the risks of the drug war cooperation and the power of the cartels.” In the aftermath of their bilateral meeting Carlsen acknowledged, “Despite talk of a deteriorating relationship, in fact the Calderon and Obama administrations are overseeing the birth of historically unprecedented cooperation between the two nations.”

While the U.S.-Mexico partnership will encounter more difficulties along the way, both countries are forging closer economic and security ties. Unfortunately, rather than plotting a new course, they have recommitted to the failed war on drugs. A stable Mexico is critical to U.S. national interests, but not enough is being done to secure the southern border. Meanwhile, the U.S. and Canada are pursuing a new trade and security perimeter agreement without their NAFTA partner. Although trilateralism has taken a backseat to bilateral initiatives, Mexico remains important to the future security of North America.

Dana Gabriel is an activist and independent researcher. He writes about trade, globalization, sovereignty, security, as well as other issues. Contact: beyourownleader@hotmail.com Visit his blog at Be Your Own Leader
Posted by Dana Gabriel at 8:03 AM