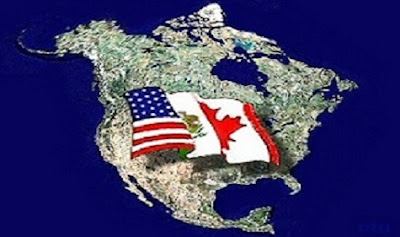 In July, Public Safety Minister Vic Toews and U.S. Department of Homeland Security Secretary Janet Napolitano, “met to advance a strategic dialogue on developing a shared vision for border security for Canada and the United States—one that will enhance security and resilience against common threats, while bolstering competitiveness and job creation.” A number of initiatives were announced, including an agreement to complete a joint threat and risk assessment which, “addresses drug trafficking and illegal immigration, the illicit movement of prohibited or controlled goods, agricultural hazards, and the spread of infectious disease.” In addition, a memorandum of understanding on cross-border currency seizures and information sharing was signed that, “will help to identify potential threats and assist in money-laundering and terrorist-financing investigations and prosecutions.” Increasingly, Canada is being pressured to further take on U.S. security priorities in an effort to keep trade flowing across the northern border.

Secretary Napolitano and Minister Toews also reached an agreement to safeguard and respond to disruptions of shared infrastructure that connect the two nations such as roads, power grids and bridges. The Canada-U.S. Action Plan for Critical Infrastructure is designed to, “strengthen the safety, security and resiliency of Canada and the United States by establishing a comprehensive cross-border approach to critical infrastructure resilience.” This includes building partnerships, improved information sharing, as well as risk management aimed at increasing the ability to prepare for emergencies like a terrorist attack or a natural disaster. The action plan is part of ongoing cross-border collaboration and builds off a recent deal reached between the Canadian federal and provincial governments in regards to protecting local infrastructure. It also appears to be linked to the Civil Assistance Plan signed by the U.S.-Canadian military in 2008, which allows the armed forces of one nation to support the other during a civil emergency.

In April, Minister of International Trade Peter Van Loan was in Washington, D.C to promote deeper Canada-U.S. ties. He met with U.S. Trade Representative Ron Kirk and they agreed to hold twice-annual trade meetings to enhance bilateral relations. In July, they met in Ottawa to discuss greater economic cooperation and the need to avoid protectionism. Through NAFTA, both nations economies are already intimately interrelated. and integrated. While some advocate more trade between the two partners as the answer to strengthening their respective economies, it was recently reported that Canada’s trade deficit increased by a record level in July. This is related in large part to its dependence on the struggling American economy.

At the trade meetings in Ottawa several months back, Minister Van Loan and Ambassador Kirk also addressed the Canada–U.S. Agreement on Government Procurement. The deal resolved the Buy American issue and is essentially an extension of NAFTA. Some believe that it is an important step in providing protection for future bilateral trade relations, but in the process it opens up provincial and municipal contracts to foreign corporations. The 5th round of negotiations between Canada and the European Union (EU) on a Comprehensive Economic and Trade Agreement (CETA) will take place in October. One of the EU’s top objectives includes gaining access to procurement and services in areas of health, energy, water, as well as other sectors. The Canada-U.S. Buy American deal could be used to further reinforce EU demands. While Canada needs to lessen its dependence on the U.S. economy, there are concerns that CETA will be based on the failed NAFTA trade model.

The report Skating on Thin Ice: Canadian-American Relations in 2010 and 2011 released earlier this year and authored by Alexander Moens of the Fraser Institute, praised the Canada-U.S. agreement on government procurement. It suggested the deal, “should encourage free traders on both sides of the line to continue pressing for deeper economic cooperation.” Considering the bilateral discussions and initiatives which have progressed in the last several months, it appears as if this forecast was indeed correct. The report also emphasized that, “Canada and the United States need to pursue deeper trade integration in such areas as regulatory harmonization, common external tariffs on manufactured products, free trade in agricultural products, and an overall energy and environmental accord.” For the U.S. to be more receptive to increased trade and investment, it recommends establishing a, “unified regime to deal with a common security threat.” In order for deeper economic integration to move forward, Canada will be further pressed to adopt a single security strategy dominated by American interests. This poses a serious threat to its sovereignty.

The trilateral framework remains intact, but NAFTA partners at least for the time being, are pursuing a more bilateral agenda for advancing continental integration. This seems to be drawing less attention. The current approach is due in part to the Security and Prosperity Partnership (SPP) of North America being exposed and discredited. It is interesting to note that there has yet to be an announcement concerning this year’s edition of the North American Leaders Summit introduced in 2005 with the launching of the SPP. Mexican President Felipe Calderon’s separate trips to the U.S. to meet with President Barack Obama and to Canada to meet with Prime Minister Stephen Harper back in May, might have served as this year’s version of the leaders summit. Calderon used the state visits as an opportunity to strengthen NAFTA ties and promote deeper North American economic integration.

The SPP appears to be dead in name only as some of its key priorities continue through other initiatives. It remains the blueprint for further expanding NAFTA. Continental integration is a permanent agenda and the vision for a North American Union has not been abandoned.

Dana Gabriel is an activist and independent researcher. He writes about trade, globalization, sovereignty, security, as well as other issues. Contact: beyourownleader@hotmail.com Visit his blog at Be Your Own Leader
Posted by Dana Gabriel at 12:02 PM