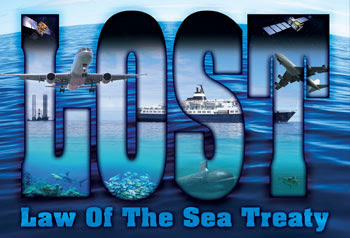 LOST is the legal framework by which all activities on, over, and under the world’s oceans are to be governed. It would place 70% of the earth’s surface under UN control. In his past article entitled LOST at Sea, Congressman Ron Paul writes, “Under the Law of the Sea Treaty, an International Seabed Authority would control the minerals and other resources of the oceans’ seabed. After taking its own cut, this UN body would transfer whatever is left to select third-world governments and non-governmental organizations.” Many argue that if the U.S. does not ratify LOST, they might lose out on the mad dash for Arctic resources. Critics contend that under the treaty, the U.S. would be forced to obtain UN permission before conducting ocean development, which would make any new activities that much more difficult and costly.

The International Seabed Authority would have the power to set production control for ocean mining, drilling and fishing. They would also regulate ocean exploration, issue permits, charge fees and settle disputes within its own court system. Under LOST, an international tribunal has been established made up of a panel of 21 UN judges who have the power to enforce treaty provisions and rulings. Ratifying LOST would further place U.S. interests at the mercy of international courts whose decisions could override domestic laws.

In the same article on LOST, Ron Paul also states that, “The Law of the Sea Treaty also would give the UN power to tax American citizens and businesses, which has been a long-time dream of the anti-sovereignty globalists.” LOST is closely integrated with other treaties, such as the Convention on Climate Change and it could be used as a backdoor for global taxation. Ratifying LOST could facilitate the ability of environmental organizations to sue the U.S., using international courts. Under the guise of protecting the environment, the UN is gaining more control over individuals and nation-states alike.

A recent incident in the South China Sea between a U.S. military intelligence ship and several Chinese vessels, has prompted accusations from both sides. The Americans insist that the Chinese were harassing the U.S. ship and were in violation of international law. In turn, China condemned U.S. actions as being illegal and in violation of LOST, as well other laws and regulations. China has ratified LOST and it appears as if their interpretation of the treaty is being used as a means to try and ban all foreign military ships from operating inside its 200 mile exclusive economic zone. The U.S. ratifying LOST would not prevent any such future incidents, but rather could serve to limit its military intelligence operations. LOST could severely compromise America’s ability to move freely on the high seas.

The United Nations cannot be trusted in protecting American interests. Under LOST, the U.S. would only have one vote, unlike the UN Security Council where it enjoys veto power. UN bureaucracy has proven to be a breeding ground for corruption. It would be unwise to hand over any control of the oceans, oil, gas and minerals to the UN. The last thing the U.S. needs to do is surrender more sovereignty.

Dana Gabriel is an activist and independent researcher. He writes about trade, globalization, sovereignty, security, as well as other issues. Contact: beyourownleader@hotmail.com Visit his blog at Be Your Own Leader
Posted by Dana Gabriel at 1:16 PM