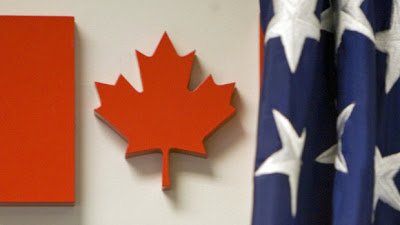 In a move that went largely unnoticed, the U.S. government unveiled a new counter-narcotics strategy for the northern border which will work towards closer cooperation with Canada in the war on drugs. This includes both countries strengthening integrated cross-border intelligence sharing and law enforcement operations. Canada has also released a comprehensive counter-terrorism plan aimed at combating the threats of domestic and international violent extremism. The separate U.S.-Canada undertakings are both tied to the Beyond the Border deal and efforts to establish a North American security perimeter.

In January, the Obama administration announced the National Northern Border Counternarcotics Strategy. A press release by the Office of National Drug Control Policy (ONDCP) described how the plan seeks, “to reduce the two-way flow of illicit drugs between the United States and Canada by increasing coordination among Federal, state, local, and tribal enforcement authorities, enhancing intelligence sharing between counterdrug agencies, and strengthening ongoing counterdrug partnerships and initiatives with the Government of Canada and the Royal Canadian Mounted Police (RCMP).” Senator Charles Schumer proclaimed, “I pushed so hard for this strategy to be finalized because we have to immediately stop the flow of drugs from Canada into New York, and it’s going to take an inter-agency and international effort.” He added, “I’m pleased that this agreement lays the groundwork for Canadian and American law enforcement to work hand-in-glove to fight the drug trade.” Schumer has also endorsed the new cross-border action plan. In addition, he is pushing to establish a Northern Border Intelligence Center in Franklin County, NY to better coordinate efforts to fight drug smuggling and other cross-border criminal activities.

While commenting on the new plan to disrupt the flow of drugs over the U.S.-Canada border, ONDCP Deputy Director of State, Local and Tribal Affairs, Ben Tucker explained that, “By strengthening integrated cross-border law enforcement between our two countries, the Strategy supports a key area of cooperation outlined by President Obama and Prime Minister Harper in the Beyond the Border declaration.” In December of last year, the leaders issued the follow up Perimeter Security and Economic Competitiveness Action Plan. The deal focuses on addressing security threats early, facilitating trade, economic growth and jobs, integrating cross-border law enforcement, as well as improving infrastructure and cyber-security. As part of the agreement, both countries will, “create integrated teams in areas such as intelligence and criminal investigations, and an intelligence-led uniformed presence between ports of entry.” The U.S. and Canada continue to expand the nature and scope of joint law enforcement operations, along with intelligence collection and sharing.

The new northern border drug strategy also called for increasing judicial cooperation, improving information-sharing and extradition arrangements, as well as better coordinating cross-border undercover operations and investigations with Canada. It recommended working towards, “operational fusion with Canadian partners in interoperable communications, technology, and activities. The ability to integrate Canadian and U.S. technology, including sensors, videos, radio communications, and radar feeds, will permit automated sharing of timely information.” The document also argued that, "It is imperative that Canada and the United States work together to expedite the sharing of information from electronic communication service providers; and share information necessary to lay the foundation for intercepting internet and voice communications.” While various new measures are being put in place to thwart illegal drug, terrorist and other criminal activity, they could easily be used to target anyone else the government deems a threat.

The use of technology is emphasized throughout the report, “Technical collection capabilities and programs along the Northern border, such as thermal camera systems, License Plate Readers (LPRs), Mobile Surveillance Systems, Unmanned Aircraft Systems (UAS), national distress and command and control networks, and Remote Video Surveillance Systems will be deployed and carefully coordinated among participating agencies.” The new strategy also recommended enhancing air and maritime domain awareness and response capabilities as another means of disrupting the flow of illegal drugs across the U.S.-Canada border. In February of 2009, U.S. Customs and Border Protection began using unmanned aerial vehicles on the northern border and expanded the program in January of last year. The UAV drones are being deployed in support of border security, counter-narcotics and counter-terrorism missions. Congress recently passed a bill that will make it easier for the government to use surveillance drones and it is projected that that there could be up to 30,000 in operation over U.S. skies by 2020.

On February 9, the Conservative government released the Building Resilience Against Terrorism: Canada’s Counter-terrorism Strategy. The new plan is aimed at countering domestic, as well as international terrorism and better protecting Canadian interests. It outlined counter-terrorism efforts under four pillars, “prevent individuals from engaging in terrorism; detect the activities of individuals who may pose a terrorist threat; deny terrorists the means and opportunity to carry out their activities; and respond proportionately, rapidly and in an organized manner to terrorist activities and mitigate their effects.” The report stressed partnership and cooperation as the key to achieving these goals which, “will require an integrated approach not only by the Government of Canada, but by all levels of government, law enforcement agencies, the private sector and citizens, in collaboration with international partners and key allies, such as the United States.” The strategy will, “serve to reinforce security initiatives between Canada and the U.S. and will complement the Canada-U.S. Beyond the Border: A Shared Vision for Perimeter Security and Competitiveness.”

The anti-terror policy identified Sunni Islamist extremism as Canada’s top security threat. It also warned of homegrown terrorists and lone wolf attackers, including issue-based domestic extremism which it stated, “tends to be based on grievances—real or perceived—revolving around the promotion of various causes such as animal rights, white supremacy, environmentalism and anti-capitalism.” CTV News reported that similar intelligence assessments can be found in documents regarding CSIS and RCMP surveillance between 2005-2010 which categorized, “some animal rights, environmental and aboriginal activists alongside terrorists that pose a threat to national security.” The documents were obtained through access to information requests. They became the basis of the research paper Making up Terror Identities where authors Jeffrey Monaghan and Kevin Walby voiced concerns on how, “intelligence agencies have blurred the categories of terrorism, extremism and activism into an aggregate threat matrix. This blurring of threat categories expands the purview of security intelligence agencies, leading to net-widening where a greater diversity of actions are governed through surveillance processes and criminal law.”

The never ending war on drugs and war on terrorism are being used to justify the huge police state security apparatus being assembled. This includes the militarization of the northern border and plans for a North American security perimeter. In the name of national security, there has been a steady erosion of civil liberties and privacy rights in both the U.S. and Canada. Our freedoms are under assault. The amount of information being collected and shared on all aspects of our daily lives has expanded and is being stored in massive databases. Sweeping new surveillance powers targeting terrorists and other criminals are being increasingly turned against those who are critical of government policy. There is a concerted effort to demonize political opponents, activists, protesters and other peaceful groups. We are witnessing the criminalization of dissent where those who oppose the government’s agenda are being labelled as terrorists and a threat to security.

Dana Gabriel is an activist and independent researcher. He writes about trade, globalization, sovereignty, security, as well as other issues. Contact: beyourownleader@hotmail.com Visit his blog at Be Your Own Leader
Posted by Dana Gabriel at 4:03 PM