A Perimeter Approach to Security and the Transformation of the U.S.-Canada Border 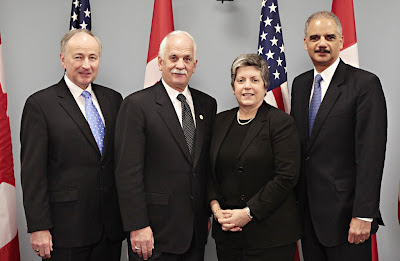 Through a series of bilateral meetings, U.S. and Canadian officials are busy working out the details of the perimeter security action plan. This includes a recent joint crime forum that dealt with border and law enforcement issues. These various discussions are part of the implementation process which when finished would bring about the complete transformation of the northern border and another step closer in the creation of a fully integrated North American security perimeter.

In early March, U.S. Attorney General Eric Holder and Secretary of Homeland Security Janet Napolitano met with Canadian Justice Minister Rob Nicholson and Public Safety Minister Vic Toews as part of the Cross-Border Crime Forum. On the agenda was, “transnational crime issues such as organized crime, counter-terrorism, smuggling, economic crime and other emerging cross-border threats.” Both countries also signed a memorandum of understanding on the Dissemination and Exchange of Information to combat human smuggling and trafficking. The meetings were used as an opportunity to further advance U.S.-Canada cooperation in areas of law enforcement, criminal justice and intelligence. This ties in with my previous article which detailed the Obama administration’s new counter-narcotics strategy for the northern border that includes closer collaboration with Canada in the war on drugs. Much of the joint crime forum discussions focused around the progress being made on the Perimeter Security and Economic Competitiveness Action Plan, announced in December 2011.

A readout of Attorney General Holder and Secretary Napolitano’s visit to Ottawa explained that talks with their Canadian counterparts centered largely around promoting the perimeter security agreement. It highlighted, “efforts to develop the next-generation of integrated cross-border law enforcement operations, and improve information sharing practices.” Attorney General Holder stated, “Our productive discussions today at the Cross Border Crime Forum go a long way toward advancing a key pillar of the Beyond the Border initiative that President Obama and Prime Minister Harper announced last year: integrated law enforcement that adds value to our relationship by leveraging shared resources, improving information sharing and increasing coordination of efforts.” Secretary Napolitano emphasized that, “We will continue to work with Canada to further enhance information sharing and integrate our cross border law enforcement operations, strengthening the national and economic security of both our nations.” As part of the perimeter security deal, both countries are moving ahead with harmonizing intelligence sharing capabilities.

The Canada Border Services Agency (CBSA) and U.S. Customs and Border Protection (CBP) recently hosted a stakeholder meetings regarding programs and initiatives found in the Beyond the Border action plan. CBP Acting Deputy Commissioner Thomas Winkowski confirmed that the, “agreement forged by President Obama and Prime Minister Harper is about strengthening and expediting trade and travel between our countries.” He went on to say, “It’s about finding common-sense solutions to our most complicated problems. And it’s about extending national security for both of our nations, well away from the border.” CBSA President Luc Portelance acknowledged, “As these joint meetings with stakeholders indicate, we are committed to working with our U.S. partners to bring about greater consistency, efficiency and predictability in the management of our shared border.” The perimeter security deal will mean deeper integration between both border agencies. Some have warned that it might force Canada to harmonize its immigration and refugee policies with U.S. practices. Over a period of time, this could lead to the creation of a binational institution that would manage the northern border.

Steven Chase of the Globe and Mail reported that during recent border security discussions, Department of Homeland Security Assistant Secretary of International Affairs, Alan Bersin commented on how, “he believes the time will come when Canada and the United States have a joint organization to handle border controls – what he described as a NORAD border.” Bersin is quoted as saying, “Why should we have separate admissibility processes … if, in fact, North American security would suggest that a Canadian and a U.S. immigrations and customs official ought to be working together to clear people in Frankfurt who are coming into Canada, to clear them such that they would be able then to come seamlessly across (the joint border into) the United States.” An article by Christopher Sands of the Hudson Institute also included another top level Homeland Security official using the same NORAD analogy to describe future joint border controls. David Heyman explained that this, “could be a model for how the two countries might handle the protection of citizens against 21st-century threats from terrorism, pandemics, cyberattacks, and organized crime.”

On February 16, the Conservative government introduced the Protecting Canada’s Immigration System Act. The legislation proposed, “reforms to the asylum system to make it faster and fairer, measures to address human smuggling, and the authority to make it mandatory to provide biometric data.” The new changes would put Canada in line with the U.S. and other international partners. Immigration Minister Jason Kenney praised the use of biometrics as an, “important new tool to help protect the safety and security of Canadians by reducing identity fraud and identity theft.” He added, it “will improve our ability to keep violent criminals and those who pose a threat to Canada out. In short, biometrics will strengthen the integrity of Canada’s immigration system while helping facilitate legitimate travel.” Under the section about sharing relevant information to improve immigration and border determinations, the U.S.-Canada action plan calls for implementing, “systematic and automated biographic information-sharing capability by 2013 and biometric information-sharing capability by 2014.” There are fears that a joint biometric identification system would be used to track Canadians and Americans alike.

U.S.-Canada bilateral dialogue on strategic issues concerning the Beyond the Border deal continues as the action plan lays out deadlines where initiatives will be incrementally implemented over the next several years. The proposed changes promise to bring about a radical transformation of the northern border. This will further bring Canadian security practices in line with American ones and under the reach of the Department of Homeland Security.

Dana Gabriel is an activist and independent researcher. He writes about trade, globalization, sovereignty, security, as well as other issues. Contact: beyourownleader@hotmail.com Visit his blog at Be Your Own Leader
Posted by Dana Gabriel at 4:37 PM