Strengthening U.S.-Canada Security Interests in North America and Around the Globe 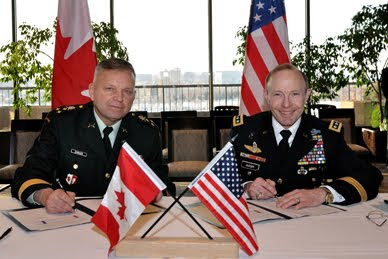 Following the recent Permanent Joint Board on Defense (PJBD) meeting which took place in Ottawa, the Commander of Canada Command, Lt.-Gen Walter Semianiw and the Commander of North American Aerospace Defense Command (NORAD) and United States Northern Command (USNORTHCOM), Gen. Charles Jacoby, Jr. signed three military documents. The first was the Combined Defense Plan which a backgrounder described as a, “planning framework between Canada Command, its counterpart USNORTHCOM, and NORAD for enhanced defense cooperation between Canada and the U.S. should governments require each other’s assistance.” The second is the Information Sharing Memorandum of Understanding, “an arrangement between Canada Command, its counterpart USNORTHCOM and NORAD to identify and provide for ease of sharing information amongst the three organizations.” The Civil Assistance Plan, which was originally signed in 2008 and allows the armed forces of one nation to support the other during an emergency was also renewed for two years.

Lee Berthiaume of Postmedia News reported that, “The Combined Defense Plan has been under discussion for several years and would further integrate cross-border military co-operation at a time when the Harper government is trying to reassure Washington it has a reliable partner in Canada when it comes to security.” Defense Minister Peter MacKay is quoted as saying, “This agreement provides a framework for the combined defense of Canada and the U.S. during peace, contingencies, and war.” He added, “The plan describes the authorities and means by which the two governments would approve homeland military operations in the event of a mutually agreed threat, and how our two militaries would collaborate and share information.” In his speech in front of the PJBD, Minister MacKay also called for, “increased military involvement implementing the Beyond the Border strategy, saying the Canadian Forces and its American counterparts should be supporting civilian agencies monitoring the cross-border security.” Also on the agenda at the defense forum was security cooperation in the Arctic, along with Canadian and U.S. engagement in the Western Hemisphere.

In an article for iPolitics, Colin Horgan wrote that at the recent bilateral defense meeting, “MacKay noted that such initiatives as Beyond the Border and the Regulatory Cooperation Council Action Plan will work to ensure that the vital economic partnership that joins our two countries continues to be the cornerstone of our economic competitiveness and security.” Defense Minister MacKay emphasized that security is linked to the economy and called for even greater cooperation to support the dual action plans. He stated, “We need to increasingly focus our military forces in support of those civilian departments and agencies that have the lead.” MacKay also explained, “We need to all work together to mitigate capability gaps, share best practices and co-operate on new approaches.” He went on to say, “there is still room for more integrated collaboration – domestically and bi-nationally.”

The latest military agreements further promote a perimeter approach to security. They are part of the Tri-Command Vision efforts to merge NORAD, USNORTHCOM and Canada Command into one. As for the PJBD, it has once again become more relevant as a venue for bilateral security and military dialogue. Created in 1940 the panel, “is the senior advisory body on continental defense. It is composed of military and diplomatic representatives from both nations.” Over the years, it has, “served as a strategic-level military board charged with considering, in a broad sense, land, sea, air and space issues.” This includes areas concerning, “policy, operations, financial, logistics and other aspects of Canada-U.S. defense relations.” The PJBD is well positioned to play a significant role in plans for a fully integrated North American security perimeter, as well as in other facets of the evolving Canada-U.S. partnership.

On January 6, the Obama administration released the new document, Sustaining U.S. Global Leadership: Priorities for 21st Century Defense. The new strategy calls for maintaining a strong presence in the Middle East, as well as an expanding role in the Asia-Pacific region. Much of the focus will be on countering China’s rising power. This will include supporting large bases in Japan and South Korea, along with stationing troops in Australia. The U.S. will also continue efforts to forge stronger military alliances with the Philippines, Indonesia, Vietnam and Burma. While the plan envisions a leaner military force, there is little doubt that Washington will continue to police the world. How does Canada fit into this new realignment of American strategic priorities? It is clear that the U.S. will rely more on its allies during international missions. Canada may gain a greater voice in future military operations, but it will also mean that they will have to bear more of the burden. In the coming years, as NATO members begin cutting defense spending, Canada will be counted on to play an even bigger role in any possible overseas conflicts.

Whether it’s the perimeter security deal, the ongoing mission in Afghanistan or the bombing campaign that took place in Libya, the U.S. and Canada continue to enhance security and military cooperation. Under Prime Minister Stephen Harper, both countries have further deepened their defense relationship. In addition, Canada has pursued a more U.S.-style foreign policy. This includes imposing tougher sanctions on Iran, along with further expanding sanctions against Syria. Much like the U.S., Harper has singled out Iran as a threat to international peace and security. He has echoed the same sentiments that the regime is seeking a nuclear weapon and would be prepared to use it. Defense Minister Peter MacKay has also indicated that if necessary, Canada's armed forces are ready to offer assistance in Syria. More than ever, the U.S, and Canada share a more common approach to advancing security interests in not only North America, but around the globe.

Dana Gabriel is an activist and independent researcher. He writes about trade, globalization, sovereignty, security, as well as other issues. Contact: beyourownleader@hotmail.com Visit his blog at Be Your Own Leader
Posted by Dana Gabriel at 3:56 PM