U.S.-EU Trade Deal is the Foundation For a New Global Economic Order 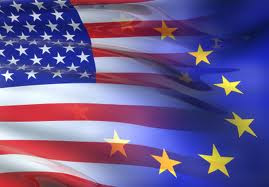 The U.S. and EU have agreed to launch negotiations on what would be the world's largest free trade deal. Such an agreement would be the basis for the creation of an economic NATO and would include trade in goods, services and investment, as well as cover intellectual property rights. There are concerns that the U.S. could use these talks to push the EU to loosen its restrictions on genetically modified crops and foods. In addition, the deal might serve as a backdoor means to implement ACTA which was rejected by the European Parliament last year. A U.S.-EU Transatlantic trade agreement is seen as a way of countering China’s growing power and is the foundation for a new global economic order.

In his recent State of the Union address, President Barack Obama officially announced that the U.S. would launch talks on a comprehensive Transatlantic Trade and Investment Partnership with the European Union (EU). A joint statement issued by European Commission President Jose Manuel Barroso, European Council President Herman Van Rompuy and U.S. President Obama explained that, “Through this negotiation, the United States and the European Union will have the opportunity not only to expand trade and investment across the Atlantic, but also to contribute to the development of global rules that can strengthen the multilateral trading system.” In a separate speech, European Commission President Barroso also emphasized that, “A future deal between the world's two most important economic powers will be a game-changer. Together, we will form the largest free trade zone in the world. So this negotiation will set the standard – not only for our future bilateral trade and investment, including regulatory issues, but also for the development of global trade rules.”

The decision to pursue a free trade deal was based on the recommendations put forth by the High Level Working Group on Jobs and Growth which was created to deepen U.S.-EU economic integration. In their final report, they called on leaders from both sides to, “initiate as soon as possible the formal domestic procedures necessary to launch negotiations on a comprehensive trade and investment agreement.” According to U.S. and EU officials, talks could start in June with the hopes of completing a deal by the end of 2014. The proposed trade pact would include removing import tariffs, dismantling hurdles to trade in goods, services, and investment, as well as harmonizing regulations and standards. It would also cover intellectual property protection and enforcement. This could be used as an opportunity for a backdoor implementation of the Anti-Counterfeiting Trade Agreement (ACTA). It was a result of public pressure associated with risks to internet freedom and privacy which lead to ACTA being rejected by the European Parliament in July of 2012. There have already been attempts to use Canada-EU trade negotiations to sneak in parts of ACTA.

Public Citizen's Global Trade Watch Director, Lori Wallach cautioned how U.S.-EU talks, “are aimed at eliminating a list of what multinational corporations call ‘trade irritants’ but the rest of us know as strong food safety, environmental and health safeguards.” She went on to say, “European firms are targeting aspects of the U.S. financial reregulation regime, our stronger drug and medical device safety and testing standards and more.” Wallach further added, “U.S. firms want Europe to gut their superior chemical regulation regime, their tougher food safety rules and labeling of genetically modified foods.” In a press release, Earth Open Source warned that, “An EU-U.S. free trade deal would obliterate EU safeguards for health and the environment with regard to genetically modified (GM) crops and foods.” Research Director Claire Robinson pointed out, “If the new trade agreement goes through, it will be illegal under World Trade Organisation rules for the EU to have a stronger regulatory system for GMOs than the U.S. system.” This is disturbing considering that in many cases, GM foods in the U.S. do not require any special regulatory oversight or safety tests.

Overshadowed by the proposed U.S.-EU trade deal is ongoing Canada-EU negotiations on a Comprehensive Economic and Trade Agreement (CETA). Despite talks being in their final stages, both sides still have some important gaps to be bridged before a deal can be reached. Thomas Walkom of the Toronto Star acknowledged that, “Europe’s real interest in negotiating a trade deal with Ottawa was to demonstrate to the Americans that a trans-Atlantic free trade pact was possible.” He noted, “EU negotiators will be even more reluctant to make concessions to Canada for fear of weakening their bargaining hand with the Americans.” Walkom argued that, “Canada is under more pressure to make a deal while Europe is under less.” He concluded that. “A Canada-EU deal seems inevitable. But now, with America in the mix, the terms for Canada may be even less favorable than expected.” The Globe and Mail recently reported that the EU is demanding additional concessions from Canada before any agreement can be signed. In order to wrap things up, a desperate Canada may be willing to give up even more. This was a bad deal from the start and it would be in their best interest to just walk away from CETA.

In the coming months, you can expect the anti-corporate globalization movement on both sides of the Atlantic to mobilize against the U.S.-EU trade agreement. It is big business and financial institutions who are pushing this deregulation agenda which threatens health, environmental and food safety standards. Just like NAFTA, the proposed U.S.-EU trade deal is also likely to include an investor-state dispute process which would give corporations the right to challenge government policies that restrict their profits. A trade agreement between the U.S. and EU is the building blocks for a new global trading system. If you combine NAFTA, the Trans-Pacific Partnership and a U.S,-EU Transatlantic trade deal, you have the makings for a global free trade area.

Dana Gabriel is an activist and independent researcher. He writes about trade, globalization, sovereignty, security, as well as other issues. Contact: beyourownleader@hotmail.com Visit his blog at Be Your Own Leader
Posted by Dana Gabriel at 7:10 PM