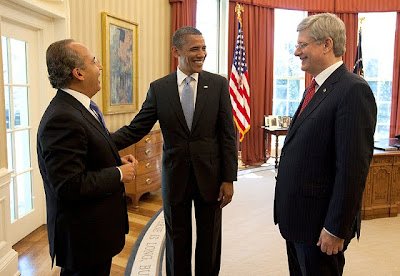 In what was hailed as an historic event, U.S. Secretary of Defense Leon Panetta, Canadian Defense Minister Peter MacKay, Mexican Secretary of National Defense Guillermo Galvan, and Mexican Secretary of the Navy Mariano Mendoza recently held the Inaugural Meeting of North American Defense Ministers. As part of a framework they agreed to, “ Develop a joint trilateral defense threat assessment for North America to deepen our common understanding of the threats and challenges we face. Explore ways to improve our support to the efforts of civilian public security agencies in countering illicit activities in our respective countries and the hemisphere, such as narcotics trafficking. Explore how we can collaborate to increase the speed and efficiency with which our armed forces support civilian-led responses to disasters. Continue to work together to strengthen hemispheric defense forums.” The ministers also committed to enhancing cooperation in the fight against transnational criminal organizations. The trilateral defense meeting is part of the ongoing efforts to establish a fully integrated North American security perimeter.

On April 2, President Barack Obama hosted Canadian Prime Minister Stephen Harper and Mexican President Felipe Calderon for the sixth North American Leaders Summit. In a joint statement they reaffirmed their, “commitment to further develop our thriving political and economic partnership with a consistent and strategic long-term vision.” The leaders acknowledged that, “continued North American competitiveness requires secure supply chains and efficient borders. We remain committed to achieving this through co-operative approaches.” With respect to regulatory initiatives, they agreed to move forward trilaterally in areas such as “vehicle emission standards, railroad safety, the Globally Harmonized System of Classification and Labeling of Workplace Chemicals, and aligning principles of our regulatory approaches to nanomaterials.” They also announced the creation of the North American Plan for Animal and Pandemic Influenza. Following the leaders summit, U.S. Trade Representative Ron Kirk engaged in discussions with Canadian Trade Minister Ed Fast and Mexico’s Secretary of the Economy Bruno Ferrari, as part of the NAFTA Commission Meeting.

In their joint communique, the leaders recognized, “the growing regional and federal cooperation in the area of continental energy, including electricity generation and interconnection and welcome increasing North American energy trade.” They emphasized the need to deepen, “cooperation to enhance our collective energy security, including the safe and efficient exploration and exploitation of resources.” There was no mention of the Keystone XL Pipeline Project which would carry oil from western Canada to the Texas gulf coast. President Obama has blocked the plan pending further environmental review. While speaking at the Woodrow Wilson Center following the leaders summit, Prime Minister Harper made it clear that even if the pipeline is approved, Canadian oil will be heading for Asian markets. Meanwhile, the U.S. has been pushing Mexico to further open up its oil sector to private investment. In February, they signed an agreement regarding, “the development of oil and gas reservoirs that cross the international maritime boundary between the two countries in the Gulf of Mexico.”

The leaders joint statement also noted that, “The Trans-Pacific Partnership (TPP) provides an opportunity to further deepen our trade relationship and create jobs. The United States welcomes Canada’s and Mexico’s interest in joining the TPP.” During a press conference with his NAFTA counterparts, Obama confirmed that, “Consultations with our TPP partners are now underway on how new members can meet the high standards of this trade agreement, which could be a real model for the world.” The U.S. is spearheading TPP negotiations which also include Australia, Brunei, Chile, Malaysia, New Zealand, Peru, Singapore and Vietnam. Japan has also expressed interest in being part of the TPP process. The door is also open for other countries to join which is why many consider it to be a building block for an Asia-Pacific free trade zone.

Robert Pastor who has been a leading advocate for deeper North American integration described the TPP as a flawed strategy. He explained Canada and Mexico’s decision to join, “as a defensive measure to ensure that they protect what they gained from NAFTA.” Pastor warned how, “the TPP will divert scarce political capital and attention from North America.” In contrast, the Council of the Americas are of the opinion that it would boost the integrated North American economy. They view the TPP as a “promising vehicle to support the updating of our bilateral and trilateral trading relationships within North America to the high standards of twenty-first century free-trade agreements.” While on a visit to the U.S. in March, Canadian Trade Minister Ed Fast proclaimed that, “As neighbours and friends, we can and should build the TPP together. As like-minded allies, we can ensure that high standards are included in the TPP on such issues as investment, regulatory cooperation, state-owned enterprises and labour provisions.” If Canada and Mexico are accepted into the TPP fold, it could be used to renegotiate and expand NAFTA.

The U.S., Canada and Mexico have also agreed to launch a consolidated Central America Integration System-North America Security Dialogue to deepen regional coordination and cooperation. This includes working closer together in the fight against transnational organized crime, arms trafficking and money laundering. During the leaders joint news conference, President Obama praised Mexico’s courage in standing up to the drug cartels, and added, “today each of us reaffirmed our commitment to meeting this challenge together -- because that’s the only way that we’re going to succeed.” President Calderon went on to say, “The security of North America is absolutely tied to each of its member states.” The Merida Initiative has expanded the U.S.-Mexico security partnership. It has provided military equipment, training, infrastructure development, along with border security and information technology enhancement. At the 2009 North American Leaders Summit, Prime Minister Harper announced Canadian support for Mexico’s fight against drug trafficking and transnational organized crime.

Mexico’s drug war is increasingly being seen as a continental problem that requires continental solutions which is further pushing the NAFTA partnership into a common security front. This is escalating the militarization of the borders, integration in areas of law enforcement and the military, as well as advancing the development of a North American security perimeter.

Dana Gabriel is an activist and independent researcher. He writes about trade, globalization, sovereignty, security, as well as other issues. Contact: beyourownleader@hotmail.com Visit his blog at Be Your Own Leader
Posted by Dana Gabriel at 4:57 PM